Although Chicago has frequently been overlooked by bigger markets, such as New York City, Los Angeles, and Detroit’s Motown era, the Windy City has made significant contributions to black culture, urban music, and entertainment by producing a number of soul legends, rappers and R&B singers who are among the all-time greatest. And in this article, we will be presenting to you the top 10 artists straight outta Chi-Town in 2021, so better buckle up for takeoff. And here we go!

Ann Marie (also known as Annmarie), a singer and songwriter from Chicago, is renowned for her intimate, aggressive, and explicit brand of modern R&B. Prior to earning further recognition with 2017’s Ann Marie and the two-volume Tripolar, which gave rise to the number 22 Hot R&B Songs hit “Secret” in 2019, she first developed her fan base on social media.

She released the complete Hate Love album in 2021 after being arrested and charged with aggravated assault in relation to the shooting of a longtime associate at an Atlanta-area hotel. She was ultimately released on bond and spent almost a year out of the spotlight.

Vic Mensa has undoubtedly been a mainstay in the music business for the past ten years, and this is clear now. Although his voice may have changed over the years and he may have worked on other projects in various businesses or musical genres, one of the best things about the renowned Chicagoan is that he always seems to return to his roots.

Roc Nation took notice of Mensa’s distinctive style and frequent collaborations with Chance the Rapper. As a result, Mensa was signed, and his 2017 studio debut, The Autobiography, was released. Over the next few years, a series of EPs, collaborations, and singles appeared, including Vino Valentino from 2022 and a collaborative project with 93PUNX in 2019.

In the second half of the 2010s, Ravyn Lenae made her debut with an ambient but song-focused kind of modern R&B that mixed elements of early Little Dragon and low-key Erykah Badu. With the release of Moon Shoes, an EP created by fellow Zero Fatigue member Monte Booker, Lenae made her debut as a teenager in 2015.

When it was first made available as a free download, major label Atlantic decided to distribute it for sale the next year. Midnight Moonlight, a shorter EP funded by Atlantic, came next in March 2017. By this time, Lenae had also accrued a number of featured appearances on songs with artists including Booker, Noname, Mick Jenkins, Saba, and Smino.

Rapper Chief Keef, a key player in the 2010s drill scene, draws inspiration from the Chicago streets and creates hard-hitting lyrics that frequently center on stories of violence and drug use in inner-city areas. With the street track “I Don’t Like,” he launched his career at the age of 16, becoming a star on the Chicago high school circuit before mixtapes and viral videos led to a deal with Interscope.

“Finally Rich,” his official debut album from 2012, peaked in the Top 30 on the Billboard 200. Two Zero One Seven, Thot Breaker, and Mansion Musick are just a few of the mixtapes that the prolific Keef released after releasing two albums in 2015—five per year in 2017 and 2018.

Producer and rapper from Chicago, Saba, addresses inner-city issues, political issues, spiritual issues, mortality, and his own loss and sadness in his lyrics, which are upbeat but honest. Saba’s verses on Chance the Rapper tracks like “Everybody’s Something” from 2013 and “Angels” from 2015 demonstrated his variety as a rapper and singer and helped prepare the way for his reflective debut studio album, Bucket List Project, which was released in 2016.

The painfully beautiful album Care for Me, which examined death, sorrow, and life after losing a loved one, was inspired by the loss of a close family member in 2018. He struggles with the ramifications of his own success in 2022’s Few Good Things.

Formerly known as Lil Herb, drill artist G Herbo of Chicago shares his experiences in a rough-hewn, urgent, and frequently painful manner. He represents the South Shore district of his city, more especially the Terror Town neighborhood. After making his debut in 2014 with Welcome to Fazoland, he later rose on the Billboard 200 with Humble Beast and Swervo.

He then continued his streak of mainstream success with albums like PTSD in 2020 and 25 the following year, each of which made the Top Ten. Herbo put out a number of singles in the first quarter of 2021, including “All Black,” “Really Like That,” and “Break Yoself,” some of which ended up on fourth studio album 25.

Juice WRLD rose to fame as a Top Ten hit-maker by spitting reflective lyricism over catchy music that had overtones of Travis Scott and Post Malone. A wide spectrum of artistic influences, including R&B instrumentation, dreamy sounds, and even indie rock melodicism, could be heard on his heartbroken 2018 debut Goodbye & Good Riddance, which also had his biggest hit “Lucid Dreams.”

The popularity of “Lucid Dreams” contributed to Juice’s sophomore album, A Death Race for Love, reaching the top of the charts. Months later, at the height of his widespread appeal, he tragically passed prematurely at Chicago’s Midway Airport after experiencing a medical emergency; he had just turned 21. Posthumously released material like 2021 album Fighting Demons would continue to top the charts years after his passing.

Lil Durk, one of the most well-known rappers from Chicago’s South Side, made a name for himself in the early 2010s as a teenager by tempering his raw lyricism with pop appeal. This strategy was successful both in his hometown and later, distant scenes that were influenced by the city’s avant-garde drill movement.

Durk has joined forces with many major labels after releasing numerous mixtapes under his Only the Family label/collective, increasing his commercial exposure with regular high places on the Billboard 200. A subsequent collaborative album with Lil Baby, The Voice of the Heroes (2021), went straight to number one, as did his 2022 album 7220.

Before signing with a major label and becoming the subject of viral hits, Polo G served time in Chicago’s prisons. The rapper, who was in his late teens, was still unsigned and unmanaged when he was released from prison and started distributing music and videos.

Tens of millions of people saw the video for his upbeat and uplifting song “Finer Things,” which helped his 2019 debut album, Die a Legend, reach the Top Ten on the Billboard 200. The Goat, one of his subsequent albums, debuted at number two in 2020, and Hall of Fame, released in 2021, debuted at number one. His subsequent albums fared even better.

Kanye West, one of the most significant and highly regarded musicians of the early twenty-first century, transitioned from hip-hop beat-maker to international hit-maker as his production work for artists like Jay-Z led to a major-label recording contract and, ultimately, a wildly successful solo career that included an unbroken string of chart-topping, multi-platinum albums and nearly two dozen Grammy Awards for classic sets like 2005’s Late Registration, 2007’s Graduation, and 2010’s.

With the release of Travis Scott’s song “Wash Us in the Blood,” the 2020s were officially welcomed. Early in 2020, West started recording his tenth studio album, Donda. The release of Donda, which bears his mother’s name, was accompanied by the same frantic energy that permeated everything West was involved with.

After a listening party at Atlanta’s Mercedes Benz Stadium in late July 2021, release dates were announced and then postponed. West then set up residence in one of the stadium’s locker rooms to continue mixing and finishing the album’s recording.

Load more
Tags
Ann Marie Chief Keef G Herbo Juice WRLD Kanye West Lil Durk Polo G Ravyn Lenae Saba Pivot Vic Mensa Ye
Ikedichim Chibundu Follow on Twitter July 20, 2022Last Updated: January 3, 2023
Check Also
Close
Back to top button
Close
We use cookies on our website to give you the most relevant experience by remembering your preferences and repeat visits. By clicking “Accept”, you consent to the use of ALL the cookies. In case of sale of your personal information, you may opt out by using the link .
Cookie settingsACCEPT
Manage consent 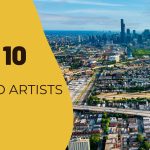