070 Shake officially releases her highly-anticipated sophomore album, You Can’t Kill Me via G.O.O.D. Music/Def Jam Recordings. Executive produced by 070 Shake and Dave Hamelin and mixed and mastered by Mike Dean, the new project arrives alongside an Alexander Wesseley-directed video for the album track “Medicine” that shows an intimate performance of the song as Shake is submerged in water while vocalizing through an oxygen mask. The album features previously released tracks “Body,” “Web,” and the first offering from You Can’t Kill Me, “Skin and Bones.”

You Can’t Kill Me is an extension of Shake’s previous interrogation of humanity, aiming to further expose her innermost feelings and to explore complicated interpersonal connections, digging deeply as a manifesto about emotional investment, codependency, and withdrawal. Speaking on the project’s premise, she shares: “We’re so attached to this physical world, it makes us more susceptible to being hurt. You can’t kill me because I’m more than my body.” Further detailing the album’s genesis, she says “With each album, it’s like you’re being revealed more and more. You Can’t Kill Me shows how dedicated I am to being free within music… Feeling is the biggest ingredient of my music.”

070 Shake is finishing her headline North American tour next week with a 4-night takeover of the El Rey in Los Angeles, culminating a 20-date run which has seen stops in Chicago, New York City, Toronto, Houston, Phoenix, and more. For a glimpse into how electric her You Can’t Kill Me Tour has been, 070 Shake recently shared a live video of “The Pines” recorded earlier this month at the House of Blues in Chicago. She also shared a look into her sold out New York City show at Terminal 5 in front of 3,000+ fans HERE. Tickets are available HERE.

Listen to You Can’t Kill Me above, see full tour routing and album details below and stay tuned for more from 070 Shake coming soon. 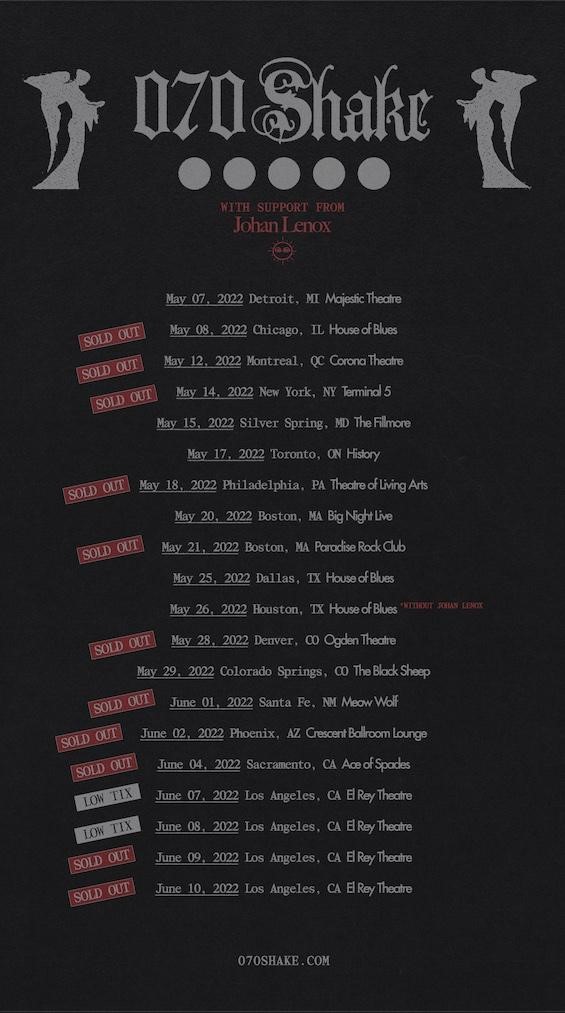 Listen To You Can’t Kill Me: https://070Shake.lnk.to/YCKM

Tags
070 Shake
Ayodeji Ibrahim Lateef Follow on Twitter June 3, 2022Last Updated: June 3, 2022
Back to top button
Close
We use cookies on our website to give you the most relevant experience by remembering your preferences and repeat visits. By clicking “Accept”, you consent to the use of ALL the cookies. In case of sale of your personal information, you may opt out by using the link .
Cookie settingsACCEPT
Manage consent