Chris “Ludacris” Bridges and award-winning rapper, singer, and actress Queen Latifah will both appear in the Netflix action thriller End Of The Road. The movie follows a recently bereaved mother named Brenda (Latifah) as she battles to keep her family safe during a bizarre road trip, according to the streaming service.

After seeing a murder take place and discovering a stolen bag of cash, Brenda and her family’s journey suddenly changes and turns into “a highway to hell.” Brenda and her brother Reggie (Bridges) are victims of an unknown killer while living at a motel in the New Mexico desert, and they are forced to battle for their life. Latifah exhibits a strong desire to protect her family in the trailer’s action-packed sequences.

Beau Bridges, Mychala Faith Lee, Shaun Dixon, and Frances Lee McCain are also featured in the Millicent Shelton-directed film End Of The Road. Tracey Edmonds, Mark Burg of Twisted Pictures, and Brad Kaplan are the producers of End Of The Road. Executive producers for Flavor Unit Entertainment include Latifah and Shakim Compere, a friend and longtime business partner.

The Netflix movie is scheduled to debut on September 8. View the End of the Road trailer below.

Tags
Ludacris Queen Latifah
Ikedichim Chibundu Follow on Twitter August 16, 2022Last Updated: August 16, 2022
Check Also
Close
Back to top button
Close
We use cookies on our website to give you the most relevant experience by remembering your preferences and repeat visits. By clicking “Accept”, you consent to the use of ALL the cookies. In case of sale of your personal information, you may opt out by using the link .
Cookie settingsACCEPT
Manage consent 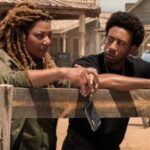