History shows again and again that it isn’t every time that people are gold. Sometimes they lose their lustre and, well, you know the rest: unusually something unpleasant. Canadian rapper Drake is walking this reality right now following the ghastly drop of his “Texts Go Green” on the Billboard Hot 100 charts.

“Texts Go Green” is taken from the Toronto ace’s recently released “Honestly, Never Mind” album, which also faced severe criticism on release. Most critics thought the project was drab and not of much appeal.

Anyway, “Texts Go Green” set a new record of epic falls from the Billboard Hot 100 chart, dropping 81 spots. Formerly at No. 13, the number now sits at No. 94, according to data from Chart Data, which also noted it was the biggest single-week downward trend in Hot 100 history – certainly not a record anyone would love to have.

Weeks earlier, Kendrick Lamar’s  “We Cry Together” had had a similar plunge. Now the American and his Canadian counterpart have a tie for an unsavoury record. 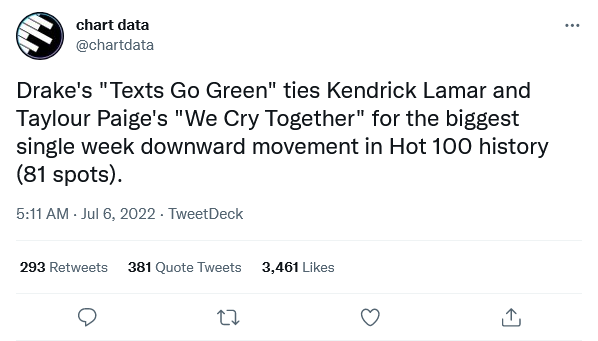 Anyway, as one Twitter fan had joked, there’s nothing to be ashamed of about Drake’s record. It only shows the songster is busy creating things. How they’re received is a different ball game altogether.

Tags
Drake Kendrick Lamar
John Anusie Follow on Twitter July 7, 2022Last Updated: July 7, 2022
Check Also
Close
Back to top button
Close
We use cookies on our website to give you the most relevant experience by remembering your preferences and repeat visits. By clicking “Accept”, you consent to the use of ALL the cookies. In case of sale of your personal information, you may opt out by using the link .
Cookie settingsACCEPT
Manage consent