For their latest single “Spinning the Truth Around,” Blue October created a mini movie in the spirit of David Lynch’s Wild at Heart and Tony Scott’s True Romance.  “I love both of those  films because love is taken to the absolute limits,” says frontman Justin Furstenfeld, who stars in the video, directed by Zach Merck in the desert outside of Los Angeles.   “Most people don’t even believe romance exists anymore.” 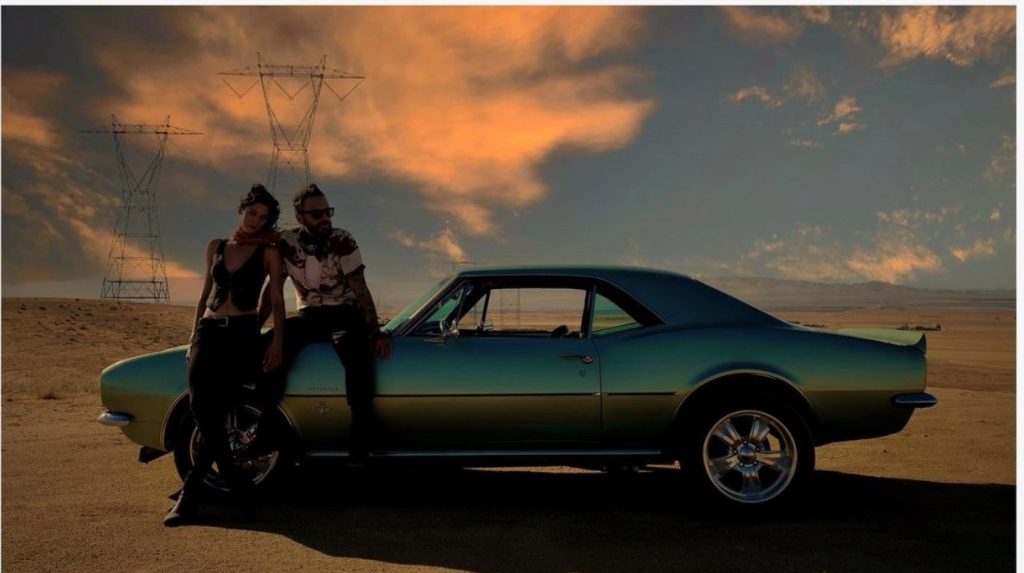 Recorded throughout 2020 and ‘21 at Furstenfeld’s Up/Down Studios, Blue October’s eleventh album Spinning the Truth Around will be a double:  Part 1 will be out October 14 (Up/Down / Brando Records), followed by Part 2 in early 2023.

For that initial spark while writing the title song, Justin asked himself, “If Springsteen had to say goodbye to someone he really cared for, how would he do it?”  The feeling of the song, Justin says, is “like a sunset, bittersweet.  It’s beautiful when it’s shining.  Sad when it’s gone.  Just grateful that you got to be a part of it.“

Blue October is currently on a North American summer tour with The Goo Goo Dolls, followed by a headlining tour this fall.  Full tour dates are below, and tickets are on sale now at BlueOctober.com.

Furstenfeld is thrilled to be making his feature film debut on September 23 as a villain in the action movie Section 8 (AMC+), alongside Dolph Lundgren, Mickey Rourke, Dermont Mulroney and Ryan Kwaten.  Directed by Christian Sesma with an original screenplay by Chad Law (The Hit List, Black Water), Section 8 is the story of a former soldier who, after avenging the murder of his family, is sprung from prison and recruited by a shadowy government agency.   Read more at the Hollywood Reporter and Deadline.  Furstenfeld has also wrapped the film Lights Out, co-starring Frank Grillo, Mekhi Phifer, Scott Adkins and Dermot Mulroney.

Now celebrating 10 years of sobriety, Furstenfeld is the subject of the biographical documentary Get Back Up, with the mission of offering hope.  Award-winning filmmaker Norry Niven documented Justin’s journey for a decade,  A story of survival and reinvention, Justin became a light for those in need.  Get Back Up is streaming now on Amazon Prime and iTunes, and check out the trailer.

Formed in 1995, Blue October has amassed over a billion streams, and has charted 16 hits over 10 albums.  Watch “Spinning the Truth Around” video below:

More dates to be announced.

Ticket information can be found here.