He’s one of the youngest to start rapping, but Bow Wow has dropped a bombshell after many years on the rap scene: he regrets his music career.

The songster revealed his regrets after a fan put a question to him. The fan, who goes by the handle @DaBigrambanoski, had asked Bow Wow if he had any regrets in the music business and if there was something he could have changed given a chance.

Reacting to the question, the “Wanted” rapper noted that he wished he never touched music but stuck to acting. However, it cannot be determined what made him reach that decision. 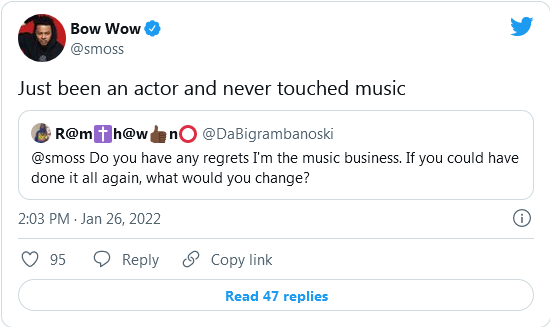 Earlier in the week, before the fan popped the question at Bow Wow, the songster, who had initially appeared on the music orbit as Lil Bow Wow, was trending on Twitter after a user of the platform claimed no one could name any three songs by Bow Wow.

That notwithstanding, man see Bow wow as a legend in the industry, although his music commitments have waned over the years.

By the way, at some point in his life, Bow Wow had thought of leaping into the world of professional wrestling. But unfortunately, the wrestling thing didn’t quite pan out, and Bow Wow remains mostly known for his music and TV.