The women of hip hop have had a turbulent month. Despite Lil Kim’s denials, fans and 50 Cent claimed she had disparaged Nicki Minaj in her verse on Megan Thee Stallion’s “Plan B (Remix)” last week. After Nicki released her eagerly awaited Queen Mix version of “Super Freaky Girl,” featuring JT of the City Girls, BIA, Katie Got Bandz, Akbar V, and Maliibu Mitch, things got even more heated for the Barbz.

They even charged Megan with “encouraging abortion & child endangerment with alcohol” after Nicki criticized a female rapper for pressuring her to consume alcohol while pregnant. Although Megan has since refuted the allegations, tensions among the rap girlies are still at an all-time high. Cardi B seems to address the big issue in a recent Twitter tirade.

“This sh** is tiring, old, and redundant,” she tweeted. “Same formula, DIFFERENT YEAR = start chaos, drama, and then promote their sh**. I actually have a life outside of my house and Twitter. Until b***** put a @ on it they talking to their mother. Byeeee.” 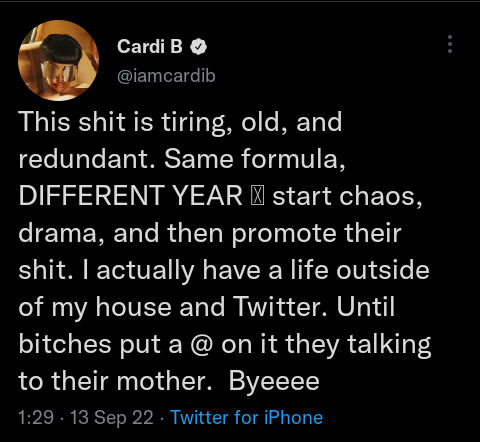 Cardi followed up the post, claiming that anyone who has a fight with her should personally tag her on social media, even though she didn’t specifically name anyone.

Tags
Cardi B
Ikedichim Chibundu Follow on Twitter September 13, 2022Last Updated: September 13, 2022
Check Also
Close
Load more
Back to top button
Close
We use cookies on our website to give you the most relevant experience by remembering your preferences and repeat visits. By clicking “Accept”, you consent to the use of ALL the cookies. In case of sale of your personal information, you may opt out by using the link .
Cookie settingsACCEPT
Manage consent