Doja Cat recently shaved her brows and head after complaining about the hair interfering with her gym routine. Harmless enough decision, except that some fans think her decision concerns them – and they have been spitting expletives her way since.

Doja loved her look, so she was unconcerned with all the hate flying around her over it. But she got fed up at some point and lashed out at those criticizing her.

She was unapologetically vehement replying her critics in a tweet. She listed some of her achievements and emphasized the fact that she’s still making hit after hit. But out there, some average peeps want her to live a certain way to massage some of their fantasies.

She’s having none of that, and she gave her critics a fat middle finger, which you can check out below. 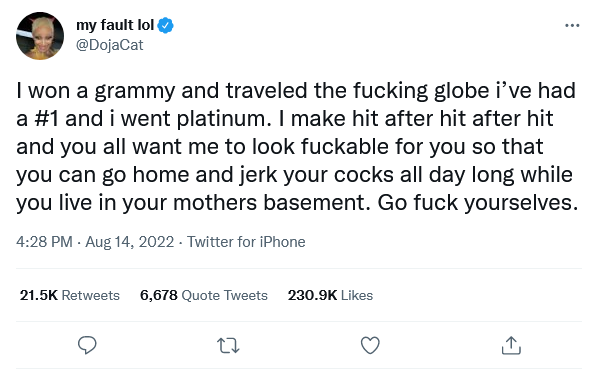 One of her fans was unimpressed with her reaction, though. According to the fan, she shouldn’t give too much attention to her critic but should focus on those who support her. Starved off attention, the critics would most likely fall off.

Anyway, Doja Cat has made her point, and it’s up to her critics to either shape up or risk new grenades being thrown in their direction by the “Streets” rapper.

Tags
Doja Cat
John Anusie Follow on Twitter August 17, 2022Last Updated: August 17, 2022
Back to top button
Close
We use cookies on our website to give you the most relevant experience by remembering your preferences and repeat visits. By clicking “Accept”, you consent to the use of ALL the cookies. In case of sale of your personal information, you may opt out by using the link .
Cookie settingsACCEPT
Manage consent