According to the latest data from Chartdata on Twitter, Drake and NBA YoungBoy are currently leading the charts for the most-streamed album of 2022, with the Canadian rapper edging Youngboy by a small margin.

Drake has racked up 3 billion streams in 2022, leading YoungBoy, who has managed to amass 2.8 billion streams across all platforms this year. With YoungBoy set to release a new single today, it is only a matter of time before he catches up with Drake at the top of the ranking.

There are also places on the list for  Taylor Swift, ranked 3rd with 2.8 billion streams, and Morgan Wallen, ranked eighth with 1.7 billion streams. Superstars Eminem and Future also appear on the chart with 1.5 billion streams each to complete the top 10 lists of most streamed artists in 2022.

It has, so far, been a successful year for both Drake and YoungBoy, who have kept their places as first and second with 1.4 and 1.3 billion streams, respectively, from the last version of the chart released in March. 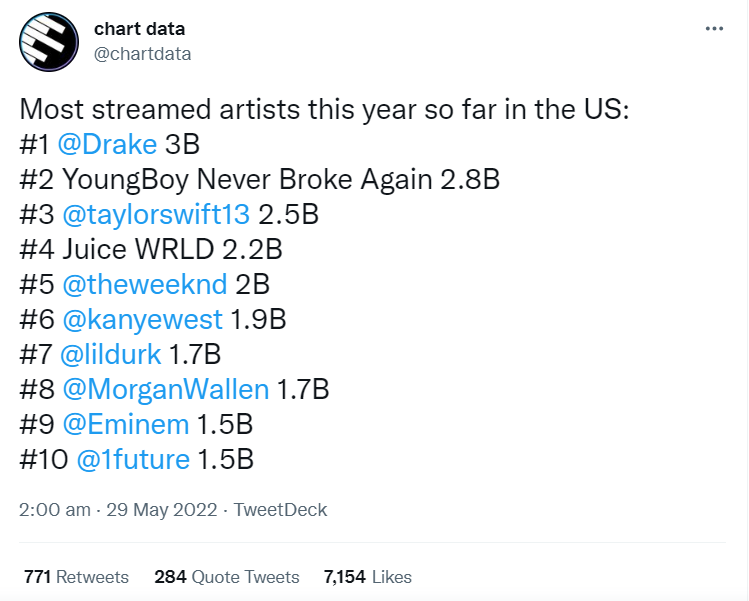 Tags
Drake NBA Youngboy YoungBoy
Olumide JokotadeMay 30, 2022Last Updated: May 30, 2022
Check Also
Close
Back to top button
Close
We use cookies on our website to give you the most relevant experience by remembering your preferences and repeat visits. By clicking “Accept”, you consent to the use of ALL the cookies. In case of sale of your personal information, you may opt out by using the link .
Cookie settingsACCEPT
Manage consent