Adele recently made a comeback to public stage performances after a brief hiatus, singing songs from her most recent album, 30, as well as previous classics in London’s Hyde Park. According to Uproxx, the 34-year-old singer once delighted her audience (and the internet) even more by doing portions of Megan Thee Stallion’s well-known “Body” choreography while singing her own 2015 single, “Water Under The Bridge.”

If you think back to last November, you might have noticed that countless TikToks were floating online that combined the Houston native’s booty-shaking dance move with the English singer’s breakup anthem. This led some users to demand that the two artists collaborate. In a February interview with PEOPLE a few months later, Thee Stallion identified Adele and Rihanna as her ideal collaborators.

MTS responded on Instagram when she saw the mother of one bust out some dance moves. She shared a Reel of the moment on her Story and wrote “Hot Girl Adele” along with several heart-eye emojis. 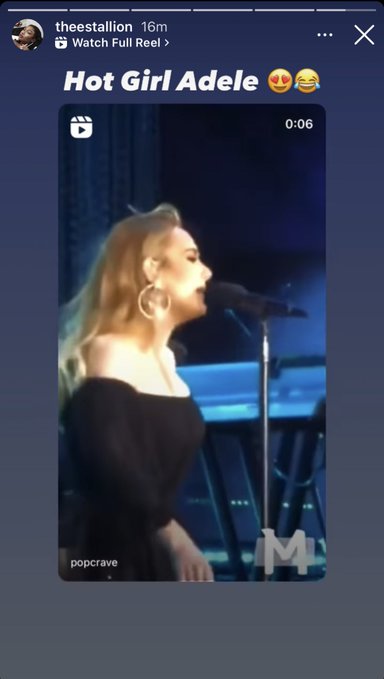 Although it’s unclear whether the Hot Girl Coach and her pal from across the pond will ever collaborate on a tune, we do know that it would be incredible to witness and that the internet is still unbeatable at producing legendary mashups.

Tags
Adele
Ikedichim Chibundu Follow on Twitter July 6, 2022Last Updated: July 6, 2022
Back to top button
Close
We use cookies on our website to give you the most relevant experience by remembering your preferences and repeat visits. By clicking “Accept”, you consent to the use of ALL the cookies. In case of sale of your personal information, you may opt out by using the link .
Cookie settingsACCEPT
Manage consent