It’s no secret that when you get just the right musical talent together in a room, magic so often happens as a result.

Adrian Miller and Om’Mas Keith can count over ten Grammys between them, and have worked with the considerable likes of Dr Dre, Jay-Z, Kanye West, Frank Ocean, Anderson .Paak, Odd Future. The name of their new label, A Tiny Universe, says it all – in that it represents a tight knit community of just such talent, who all inspire each other’s genius to next level heights.  Most recently, the pair just earned a certified gold record with Anderson .Paak / Kendrick Lamar on their collaboration “Tints”.  As Adrian Miller says, “We are … of like minds in harmony.” Om’Mas adds “B00TY perfectly embodies what we’re aiming at musically with A Tiny Universe, and both Adrian and I feel that they will ultimately represent an essential element of our musical legacy. We are truly proud to be working with such unique talents as theirs.”

Into that universe have just stepped B00TY, the LA-based electro-soul group formed and lead by songwriters and producers Edan Frei and Adam Epelbaum – and on July 20th they release their highly anticipated first single with the label, “A Matter of Time,” featuring Carl McIntosh of the legendary UK R&B group, Loose Ends. 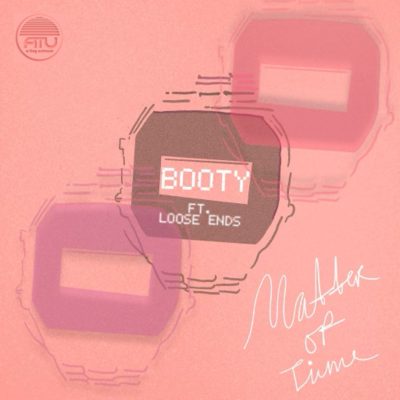 Edan and Adam originally met as students in the UCLA Theater, Film & Television program – they’ve been inseparable ever since – before music pretty much took over their lives, with them even ending up renting Jim Morrison’s old apartment together. Adopting the B00TY moniker, it was comedian/beatboxer Reggie Watts who actually booked their first show. They would go on to sign with Geffen, who put out their 2019 EP High Art; (which amassed critical praise), but after parting ways with the major label, they were quickly courted by Miller, joining an ATU roster that already includes ADP, Gumbo, Wxlf and Through the Static.

B00TY can be described as the ideal visceral hedonistic party hang for anyone seeking to channel themselves back to the original vibe of 1970s primetime Sly & The Family Stone, via the modern sensibilities of Kaytranada and Calvin Harris. And the new single arguably has “destiny” written all over it, resulting from a spontaneous meeting of the musical minds between Frei and Loose Ends frontman McIntosh.

“I was in London for a Common show,” Frei recalls (B00TY had already collab’d with the conscious rapper on his recent album, ‘A Beautiful Revolution pt 1’), ”and Adrian said I had to meet Carl McIntosh while I was there.” Adrian comments, “Loose Ends is one of my favorite R&B acts and even to be able to get him on a phone call is an accomplishment. To put him with what I see to be the next HALL & OATES was a natural connection.”   Edan continues, “The connection was instant with Carl. We made the beat together at his studio. I threw down a hook, and sent it to Adam back in LA, who finished the vocals in a day.”

Self produced by B00TY, the track is a masterstroke of cool, sensual neo-soul, with a smooth-as-silk groove recalling the likes of Earth, Wind & Fire, crossed with the alluring pop sensibility of, say, Hall & Oates, a bit of Bee-Gees disco vibes and a dash of Hot Chip’s modern electronic sensibility.

Lyrically, it’s a purely positive affirmation on wanting something and believing in it enough to wait it out.

Frei explains, “In addition to it being a love song, it’s just that idea of whatever it is you’re going for, if you really believe in it, it’s just a matter of time.”“Coming from an improv background, free-styling melodies and lyrics is one of my absolute joys,” Epelbaum enthuses. “Despite our band name, we definitely take the music-making process seriously.”

B00TY made a triumphant, post-COVID return to live performance at LA’s Soho House recently. In addition to Frei and Epelbaum, the band boasts a myriad of great live musicians and there is no shortage of female energy driving the creative philosophy forward either. Bassist/activist April Kae is a constant pulse and director/singer Sadé Clacken Joseph has sang backup vocals and been the creative force behind a majority of the group’s music videos and content from early on. Joseph is also the director of the July 21 pilot episode of Issa Rae’s new HBO series ‘Rap Sh!t’  in which “A Matter of Time” will be featured.

“Matter Of Time” is the lead single from B00TY’s forthcoming LP, currently being produced by the trusted, masterful hands of Om’Mas Keith and his unassuming musical wizardry. Adam remarks, ‘Om’Mas, he’s just got a fountain of knowledge and Edan adds, “Yeah, Om’Mas is like our Yoda or Obi Wan Kenobi”.

Tags
B00TY
Ayodeji Ibrahim Lateef Follow on Twitter July 19, 2022Last Updated: July 28, 2022
Back to top button
Close
We use cookies on our website to give you the most relevant experience by remembering your preferences and repeat visits. By clicking “Accept”, you consent to the use of ALL the cookies. In case of sale of your personal information, you may opt out by using the link .
Cookie settingsACCEPT
Manage consent