A statement against the use of the Afrobeats crooner’s song in any political campaign has been released by the family of the late Nigerian multi-instrumentalist and Afrobeat pioneer, Fela Kuti. Fela’s well-known song “Eko Ile” was used by the ruling All Progressives Congress (APC) in one of its 2023 presidential campaigning events. 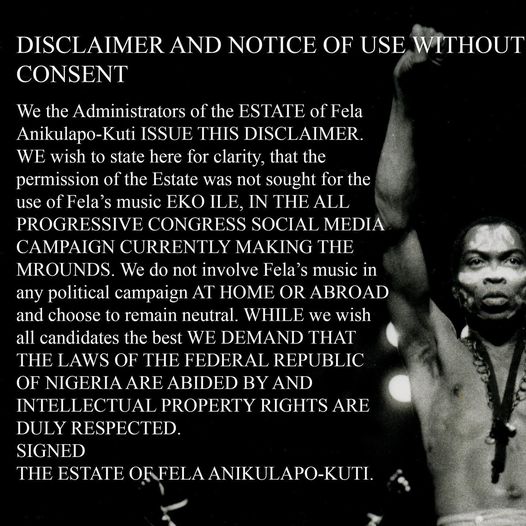 At Teslim Balogun Stadium in Surulere, Lagos State, Tinubu and the APC presidential campaign council staged a rally on Saturday. Tinubu utilized the well-known Fela song “Eko Ile” in a video recap of the event posted to Twitter.

Speaking during the gathering, Tinubu, a former governor of Lagos State, stated that if elected president, he would build a progressive administration that would make significant investments in infrastructure, education, health, and job creation.

President Muhammadu Buhari was commended by Tinubu for his dedication to the growth of Nigeria and Lagos State. The APC and Tinubu have not yet responded to the Fela Anikulapo-Kuti family’s disclaimer.

Tags
Fela Kuti
Ikedichim Chibundu Follow on Twitter November 29, 2022Last Updated: November 29, 2022
Check Also
Close
Back to top button
Close
We use cookies on our website to give you the most relevant experience by remembering your preferences and repeat visits. By clicking “Accept”, you consent to the use of ALL the cookies. In case of sale of your personal information, you may opt out by using the link .
Cookie settingsACCEPT
Manage consent