Future’s latest full-length record, “I Never Liked You” has just gone gold, after selling over 500,000 units in the US. 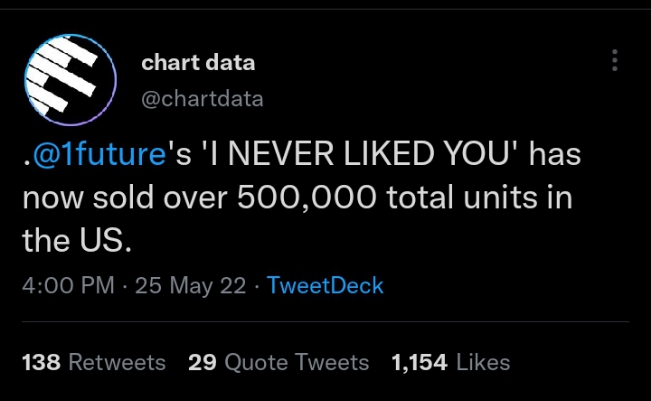 With this latest achievement, “I never Liked You” joins a long list of Future’s albums and songs that have recorded tremendous feats over the last couple of years. To mention a few, in recent years, Future his first platinum with a solo album when DS2 went platinum. Not long afterwards in 2016, Evol debuted at at number one in its first week on the Billboard Hot 100 chart, while beating juggernauts like Adele, Coldplay and Rihanna for the top spot.   In 2017, Future’s HNDRXX album had the rapper on track to become the first artist ever to debut two albums at #1 in consecutive weeks.  “I never Liked You” has now joined this exclusive list of Future’s successful albums.

The album released earlier this year brought to an end an unusual hiatus from the rapper who took some time off in 2021 and thus broke his annual tradition of releasing a new album every year since 2013. From the first listening, “I Never Liked You” always felt like an album that might eclipse the achievement of Future’s previous albums.

With the early success of the album which features a star-studded list of artists including Drake, Koda Black, Lil Baby amongst others, fans have every reason to expect more accolades for the album in months to come.