Future’s I NEVER LIKED YOU album has bagged another Gold certification, further exceeding projected expectations for the album. The album exceeded the projected 177k unit sales in its first week when it recorded over 222,000 album unit sales to debut at number one #1 on the Billboard Hot 200 albums.

Following the success of the album in it’s opening week, the album was certified Gold last week after it crossed the 500,000, album unit sales threshold. While the success of the album is in part down to Future’s master compositions and arrangements, the album is also largely successful due to its star-studded features. The Gold-certified albums features collaborations from industry heavyweights including Drake, Kanye West, Kodak, Young Thug, Gunna, Tems, and EST Gee. There were more collaborations on the deluxe version of the album released a couple of months after the first version.

One of the hot songs off the album, “Wait for You” featuring Drake and Nigerian music sensation, Tems has now earned its own platinum certification. The track, an early fan favourite, earlier set a record for the fastest record in 2022 to sell over 500k units, following its massive sale in the first couple of weeks following its release.

The track which has now racked over 1 million sales has further added over 500k streams across streaming platforms, earning it a platinum certification. The track also remains the fastest track of any collaboration to reach such feat in 2022. 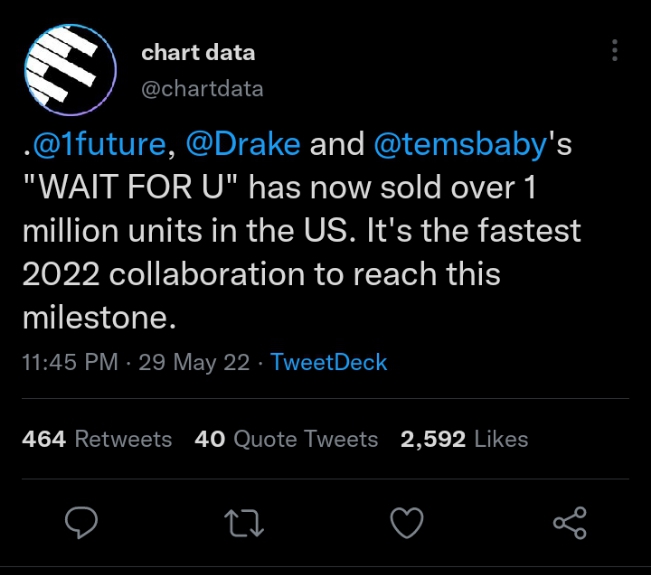 Following a tweet from chartdata announcing the success of the album, Future has himself taken to Twitter to appreciate the fans and people who collaborated with him on the track. 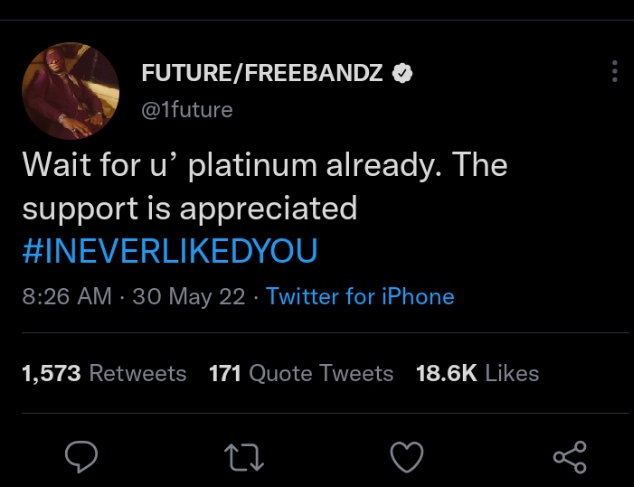 Tags
Drake Future Tems
Olumide JokotadeMay 31, 2022Last Updated: May 31, 2022
Check Also
Close
Back to top button
Close
We use cookies on our website to give you the most relevant experience by remembering your preferences and repeat visits. By clicking “Accept”, you consent to the use of ALL the cookies. In case of sale of your personal information, you may opt out by using the link .
Cookie settingsACCEPT
Manage consent