Think the grit of The Twilight Sad, the melodies Teenage Fanclub, the vocals of Camera Obscura’s Traceyanne Campbell, a combination so timeless that it feels as if Poster Paints should have existed for many years already.

“This song was a bit of a writing experiment,” vocalist Carla J Easton says. “Si sent me the track which is 3 minutes of summer guitar pop. I had recently been doing a lot of free writing in the morning (where you write non-stop without thinking and the only rule is to fill 3 pages of your notebook – also called ‘Morning Pages’) and had ended up down a route recalling an ill-fated attempt to get what I want one hot Summer and subsequently falling from grace, splitting my shin open in the process. But I never gave up. It’s a relentless 3 minutes of chasing dreams born from the uncensored pages of my notebook.” 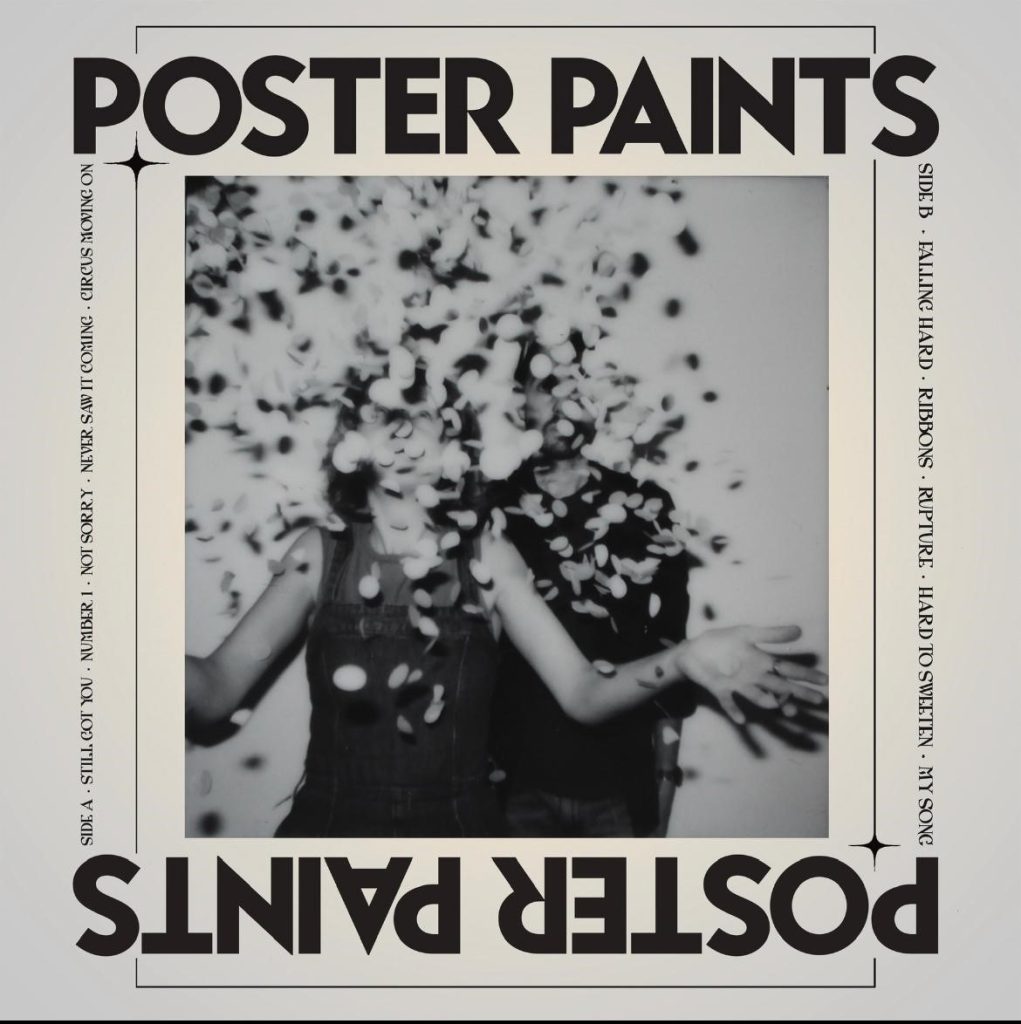 LISTEN TO THE BLOOD ORANGE EP

Poster Paints are Carla J Easton and Simon Liddell. Two beloved Scottish musicians who orbited through the same thriving music scene, Carla as an award-winning solo artist and member of TeenCanteen and Simon as part of Frightened Rabbit and Olympic Swimmers, who were introduced by Eugene Kelly and ‎Frances McKee‎ of The Vaselines. The pair seemed destined to collaborate, yet the musical outfit they created happened purely by chance.

“The project started as an accident before the pandemic kicked off” says Carla. “Si had sent me an instrumental for a piece he had scored for a short film and asked if I could put some vocals on it. I completely misunderstood what he was asking me to do and wrote an entire song to the piece of music and emailed it back to him. When harsh lockdowns kicked in, we both decided we would try and do some more songs like this – it was a way to keep collaborating when you couldn’t even go for a walk outside with someone from another household never mind be in a rehearsal room with someone.”

Applying for funding through Creative Scotland meant the pair’s immediate musical chemistry thrived in the subsequent months and allowed the remote working that had worked so well extend out across the globe, roping in friends from the USA (Gabbie Coenan aka RVBY MY DEAR), Canada (Andrew Chung and Laura Hickli) as well as across Scotland (Jonny Scott from CHVRCHES who played drums across the entire record, Lomond Campbell, Graeme Smillie from Arab Strap, Suse Bear from Pictish Trail, Andy Monaghan from Frightened Rabbit and Amanda Williams aka AMA JANE) as collaborators on their debut album.

The band released their debut single “Number 1” last year — the track was described as “reverb-splattered, riotous guitar melodies and supercharged vocals with jangle-pop primacy” (The Line of Best Fit) and received extensive play from Marc Riley via BBC 6Music, BBC Introducing and BBC Radio Scotland. It was released on vinyl postcard for Record Store Day, with both tracks supported by Creative Scotland. They followed with a surprise release EP titled Blood Orange, a brace of headline shows and support slots with Belle & Sebastian, Admiral Fallow and Teenage Fanclub. For a duo who found each other almost by accident, the immediate connection to their music from peers and fans alike more than suggests that Poster Paints were always meant to be here.