Jennifer Garner was all smiles as she showed up glowing to Good Morning America on Tuesday, March 1st, in NYC.

Joining her to grace the show was former 13 Going on 30 co-star, Mark Ruffalo, to talk about their new film, The Adam Project. Host of the show, Robin Roberts, remarked that it didn’t quite feel like it had been 18 whole years since 13 Going on 30 was released, to which Jennifer responded: “It doesn’t, but at the same time it really does.”

Mark and Jennifer were also given Razzles, their characters’ favorite candy in the movie. When asked about where they thought Jenna and Matt would be now, Jennifer answered and said she thought they’d probably have a son who shared same physical features with Ryan Reynolds, obviously making reference to their new movie.

Jennifer went ahead to explain that in The Adam Project, she and Mark are only together in only one scene, but it almost felt like they were reliving their 13 Going on 30 character’s romance.

“It really adds to the feeling of the movie and it really does feel like a continuation of the movie,” Jennifer said. And, Mark added, “Yeah, it’s like Matty and Jenna tied the knot… Again.”

Tags
Jennifer Garner Mark Ruffalo
Ikedichim Chibundu Follow on Twitter March 1, 2022Last Updated: March 31, 2022
Check Also
Close
Back to top button
Close
We use cookies on our website to give you the most relevant experience by remembering your preferences and repeat visits. By clicking “Accept”, you consent to the use of ALL the cookies. In case of sale of your personal information, you may opt out by using the link .
Cookie settingsACCEPT
Manage consent 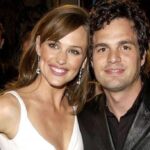