On his new track “Dead Inside,” Justus Bennetts grapples with one of life’s most perplexing questions – why does it feel so good to be with someone who’s so bad for you? Answers are elusive as he reaches the disquieting conclusion that he’s accepted the manipulation. “Dead Inside” is an unlikely anthem that bristles with dark humor, edgy electronic tones and an addictive beat paired with Justus’ uncensored youthful lyricism. Justus wrote the track with frequent collaborators Doc Daniel, Jesse Fink (John Legend), Remy Gautreau (Tate McRae), Eugene Veltman, and Jared Scharff (DaBaby, Machine Gun Kelly). 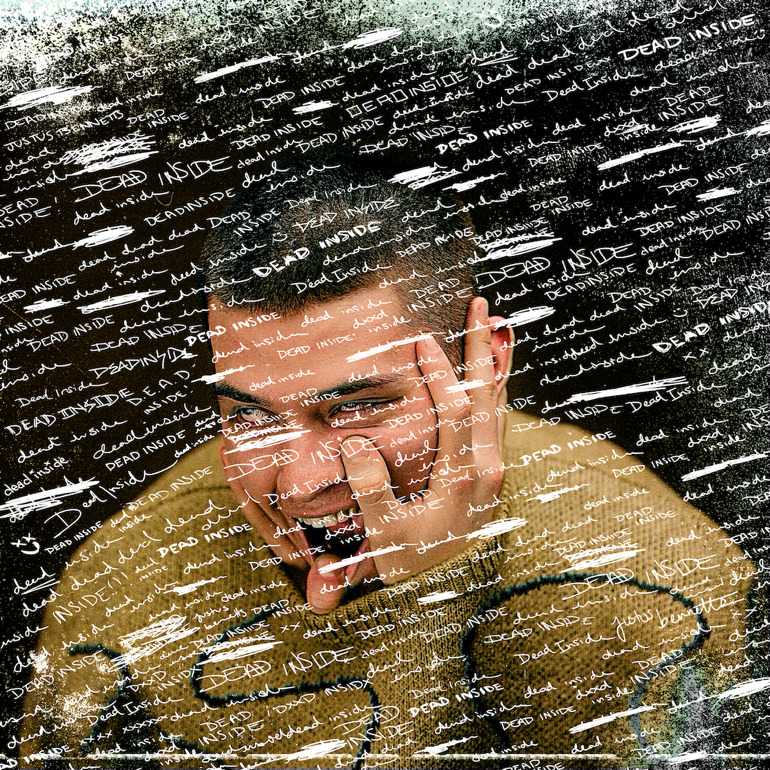 Justus will perform as a special guest on renforshort’s dear amelia tour, which launches September 15 at Longboat Hall in Toronto and includes shows at Baby’s All Right in New York (September 28) and the Moroccan Lounge in Los Angeles (October 5).

He’ll also be performing at the Breakaway music festivals in Michigan and North Carolina and Big Bootie Land in Boston. The 22-year-old recently completed his first tour – a national outing with GAYLE, who featured on his acoustic DIY tune “Don’t Trip.”

“Dead Inside” is the follow-up to the gleeful, pop-inflected “Girls.” Praising him as “one of music’s most promising (and exhilarating) new artists,” VMAN observed, “While weaving his lived experience under a heart-racing beat, Justus explores how it’s a woman’s world and he’s just living in it.” In the comical, Matt Shaffar-directed video for “Girls,” seen HERE, Justus is targeted by a group of cunning, poker-playing grandmas.

Since making his debut in 2021 with “Replace You,” Justus has amassed over 200 million combined global streams with a string of singles that include the nostalgia-soaked alt-pop smash “Cool Kids” and the brash, R&B-influenced “Bad Day.”

Ones To Watch said, “he’s established himself as a real on-the-verge artist to be contended with, taking over this generation’s defining playlists.”

All dates with renforshort (except festivals)

Tags
Justus Bennetts
Ayodeji Ibrahim Lateef Follow on Twitter September 9, 2022Last Updated: September 9, 2022
Check Also
Close
Load more
Back to top button
Close
We use cookies on our website to give you the most relevant experience by remembering your preferences and repeat visits. By clicking “Accept”, you consent to the use of ALL the cookies. In case of sale of your personal information, you may opt out by using the link .
Cookie settingsACCEPT
Manage consent