Ye is definitely aware of his value. Kanye West’s claimed seven-figure performance fee, which is significantly greater than the $1M estimate that appeared online earlier this week, may be the reason why we’ve seen fewer appearances from him in recent years.

According to HipHopDX, Instagram user @RapThoughtsDaily estimated that Ye earns $1 million every gig when compiling a list of musicians’ concert fees. The father of four (who follows the page) DM’d them to ask for a correction after the article started going viral.

“Please change this,” Yeezy wrote in the message he sent them. “My performance fee is $8 million.” 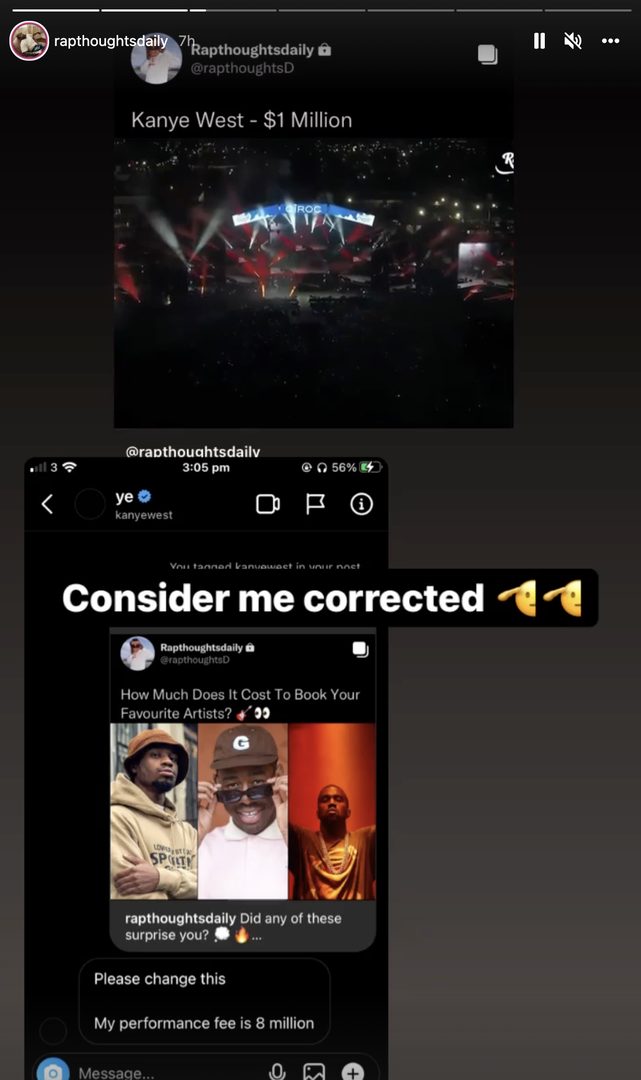 According to additional estimates made by the publication, Joey Bada$$ gets $65K, JID and Denzel Curry receives $100K, Vince Staples and Kid Cudi earns $125K, and Tyler, The Creator makes $150K. (though he rapped about making “a million a show” on his Call Me If You Get Lost collab track with 42 Dugg, “LEMONHEAD”).

The list also includes Young Thug ($1.5M), who is currently in prison, and Drake ($500K). The other musicians have neither confirmed or denied the rumors, as information about performance fee negotiations is typically kept under wraps. Regarding Ye’s $8M claim, however, it appears to be in keeping with the news stories regarding the massive sum he missed out on by withdrawing from the Coachella lineup earlier this year.

Tags
Kanye West
Ikedichim Chibundu Follow on Twitter July 6, 2022Last Updated: July 6, 2022
Check Also
Close
Back to top button
Close
We use cookies on our website to give you the most relevant experience by remembering your preferences and repeat visits. By clicking “Accept”, you consent to the use of ALL the cookies. In case of sale of your personal information, you may opt out by using the link .
Cookie settingsACCEPT
Manage consent