Not so long after Future linked with Kanye West to executive-produce Donda 2 and Kendrick Lamar performing at the Super Bowl halftime show, the three rap stars are now billed to headline this year’s Rolling Loud Miami.

The festival shared the elite roster of performers on their social media pages, alongside when tickets would be on sale. 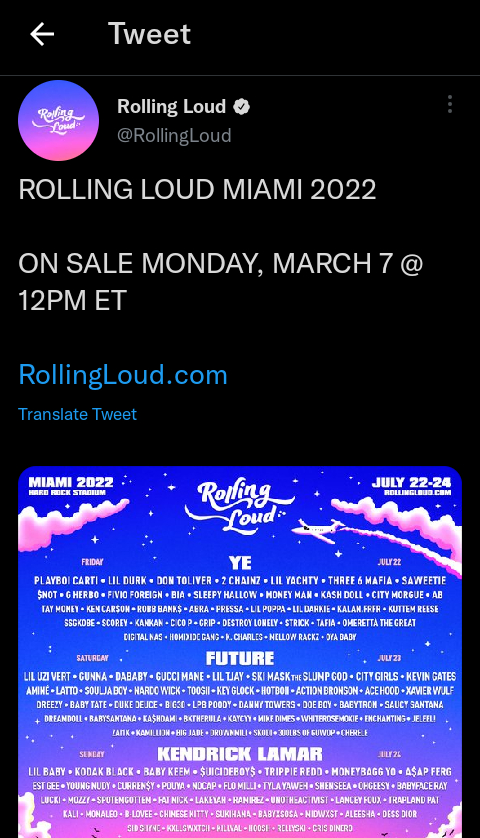 Also added to the stacked lineup are the likes of Gunna, Lil Uzi Vert, Playboi Carti, Lil Baby, Lil Durk, Don Toliver, Baby Keem, City Girls, and more. Future was notably one of the headliners for the latest Rolling Loud festival that went down in California this past December, with Ye joining him on stage as a surprise guest while he performed.

The last time Kendrick graced the Rolling Loud stage was back in 2017 when he released his last DAMN. Ever since, the TDE signee sparingly releases new music but made two appearances on his cousin, Baby Keem’s debút album, The Melodic Blue, as well as headlining the Super Bowl.

The Rolling Loud news comes right on the heels of Kanye West’s Donda 2 performance experience concert in Miami last February 22nd. Rolling Loud Miami 2022 will be at the Hard Rock Stadium in Miami Gardens from July 22-24. Tickets will be up for grabs starting March 7th.