Earlier this year, multi-disciplinary recording artist KROY teamed up with The PHI Centre in Montreal to turn her music into a live performance art piece entitled ANIMACHINA. During this residency, Jonathon Anderson at the Creative School of Ryerson University programmed three robot arms to play music and mirror KROY’s movements to tell a communal story that blurs the line between man and machine and what interpersonal connection looks like in the modern world. Today, KROY releases a seven-part video series for ANIMACHINA. 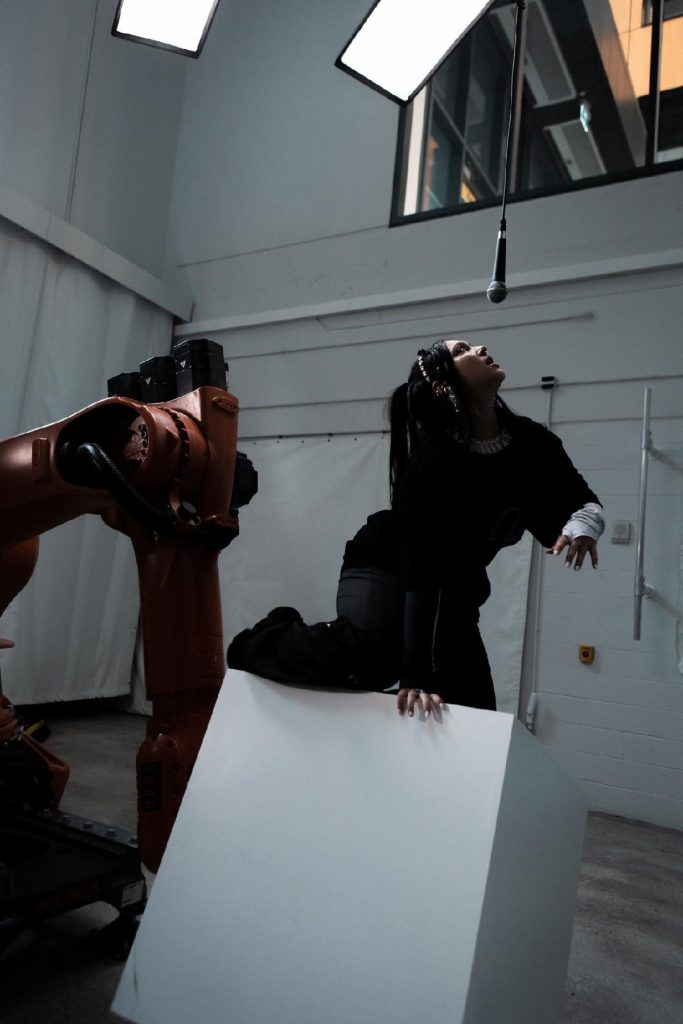 In these videos, KROY strips down her hyper-pop and hyper-sensitive sound, to showcase her vocals in a truly haunting way. Performing alongside a robot, she leaves viewers feeling entranced and unsettled as she tackles topics like love and violence. Working through the seven videos, KROY performs recent songs like “Ryan Atwood,” teases upcoming releases, and interweaves a storyline that tethers the series together.

On ANIMACHINA, the PHI Centre said, “These monster-machines, with unforgivable tentacles, perform choreographic movements with surgical precision. In unison, they strum, modulate the artist’s voice on pedals and document the scene themselves. The danger, inherent in this dance of death where a single coordination error can lead to a fatal accident, allows KROY and his team to touch the sublime. Because it is with the machines that she finds comfort and that she fully vibrates.”

These videos are a hint at what is to come from the avantgarde artist later this year as she closes one chapter of her artistry, and fiercely blows open the next.
ANIMACHINA PLAYLIST

Watch the seven-part video collection below.

Load more
Tags
Kroy
Ayodeji Ibrahim Lateef Follow on Twitter July 14, 2022Last Updated: July 14, 2022
Check Also
Close
Back to top button
Close
We use cookies on our website to give you the most relevant experience by remembering your preferences and repeat visits. By clicking “Accept”, you consent to the use of ALL the cookies. In case of sale of your personal information, you may opt out by using the link .
Cookie settingsACCEPT
Manage consent