Logic is back with two new singles today, which closely follows the release of his last LP, Bobby Tarantino III in July 2021. The two singles serve as lead singles off his upcoming album Vinyl Days, which should be the last project of his with Def Jam. Prior to now, the two singles had already been teased on TikTok.

However, the rapper wasn’t exactly pleased with the rollouts, as he took to social media to call out the label for screwing up the release. From the looks of it, it seems as though Logic had wanted the new tracks to be released as a two-pack but Def Jam had other plans, choosing for the songs to arrive as two different singles on the same day.

“Def Jam, why you f*cking up my release, man?” he asks. “I told Def Jam that I wanted to release my sh*t as a two pack and I just found out that they’re releasing it as two singles at the same time. What kind of sh* is that?”

His long-term producer, 6ix, also appear on the two new records. The classics they both have ‘cheffed’ up over the years has made them a formidable pair. Go run up the new single now available on all streaming services.

Tags
Logic
Ikedichim Chibundu Follow on Twitter April 22, 2022Last Updated: April 22, 2022
Check Also
Close
Back to top button
Close
We use cookies on our website to give you the most relevant experience by remembering your preferences and repeat visits. By clicking “Accept”, you consent to the use of ALL the cookies. In case of sale of your personal information, you may opt out by using the link .
Cookie settingsACCEPT
Manage consent 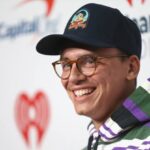