“Body” rapper Megan Thee Stallion recently appeared in an interview with Gayle Kim on CBS This Morning, where she detailed the alleged Tory Lanez shooting incident, which happened in 2020. The incident had left her injured in the foot with two gunshot wounds.

The interview aired this morning, Monday, April 25. In 2020, Thee Stallion claimed her colleague, Canadian star Tory Lanez shot her from inside an SUV following a verbal altercation. Lanez was arrested on the night of the incident on a felony charge. He has since pleaded not guilty to the charges.

In the recently aired interview, the “Thot Sh*t” rapper opened up about the alleged incident saying that she feared for her life as Lanez “shot” at her after screaming “dance bitch”. She said, “I never put my hands on anybody, I never raised my voice too loud. This was one of those times where it shouldn’t have gotten this crazy.”

After Lanez’s arrest on July 12, 2020, Megan revealed that she had suffered gunshot wounds following the incident. Police located a concealed firearm while searching the vehicle. In an emotional video posted later, Megan opened up about her injuries. She said, “Yes this n**ga Tory shot me,”

Tags
Gayle Kim Megan Thee Stallion
John Ogba-Ifeakanwa Follow on Twitter April 25, 2022Last Updated: April 25, 2022
Check Also
Close
Back to top button
Close
We use cookies on our website to give you the most relevant experience by remembering your preferences and repeat visits. By clicking “Accept”, you consent to the use of ALL the cookies. In case of sale of your personal information, you may opt out by using the link .
Cookie settingsACCEPT
Manage consent 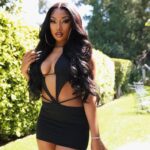