The 10-track Gemini Rights LP by Steve Lacy is just one of the many releases that arrived on digital music platforms this weekend, but it has already received praise from celebrities like Dev Hynes, Naomi Campbell, Syd, Daniel Caesar, and—possibly—the greatest compliment of them all—Kanye West.

After the midnight release of his project, Lacy posted on Instagram to acknowledge all of his notable successes and make an effort to articulate his emotions. “Gemini Rights is outttt. This feels so surreal. I can’t explain it,” he started.

“It’s a new feeling. I think I’ll be able to tell you about it in a couple months. But for now, I’ll enjoy this newness. Thank you guys for all the love and support, I promise it doesn’t go unnoticed. GEMINI RIGHTS OUT NOW.”

Ye, a fellow Gemini, stopped by to comment and praised Lacy’s music as well as his enthusiasm in general. “Album is beautiful,” Ye wrote. “One of the most inspiring people on the planet.” 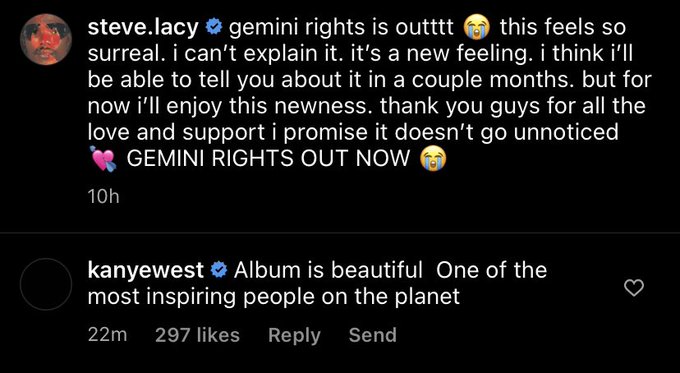 The 24-year-previous old’s full-length release since 2019’s Apollo XXI, which had only one appearance from DAISY WORLD on “Like Me,” is Gemini Rights. On “2Gether (Enterlude)” and “Sunshine,” which was released earlier this week ahead of the record’s release, Lacy chose to collaborate with Matt Martians and Fousheé, respectively.

Tags
Steve Lacy Ye
Ikedichim Chibundu Follow on Twitter July 16, 2022Last Updated: July 16, 2022
Check Also
Close
Back to top button
Close
We use cookies on our website to give you the most relevant experience by remembering your preferences and repeat visits. By clicking “Accept”, you consent to the use of ALL the cookies. In case of sale of your personal information, you may opt out by using the link .
Cookie settingsACCEPT
Manage consent