The opening platinum performance is scheduled to be followed by electric performances from Diana Ross, Elton John, Duran Duran, Craig David, Alicia Keys, Elbow, and Hans Zimmer. Italian Opera legend, Andrea Bocelli, will also be on stage alongside Nile Rodgers to perform some of their biggest hit songs.

In an unprecedented celebration of Queen Elizabeth II 70th year on the throne, there are expected to be appearances from Sir David Attenborough, Emma Raducanu, David Beckham, Stephen Fry, Dame Julie Andrews, The Royal Ballet, Ellie Simmonds, and many others from the movie and sporting industries within and outside the United Kingdom. In addition, Sir Rod Stewart, Jax Jones, Mabel, Stefflon Don, George Ezra, Lord Andrew Lloyd Webber, Celeste, Sigala & Ella Eyre and Mica Paris, Mimi Webb, and Lin-Manuel Miranda are all the the the expected to make a special appearance at the event.

There will also be a specially recorded performance by Sir Elton John. Sam Ryder, the United Kingdom’s Eurovision hero, fresh from his success in Italy, will also perform live at the event.
The show, which will be hosted, will be Kirsty Young and Roman Kemp, will feature a closing performance from legend Diana Ross with her first UK live performance in fifteen years.

The show, which will last between 2 – 5 hours, and is scheduled to take place on three stages set up in front of the palace, will have an in-person audience of at least 22,000. To reach an even wider audience, the party will be broadcast live on BBC One and Radio 2.

See the event poster below 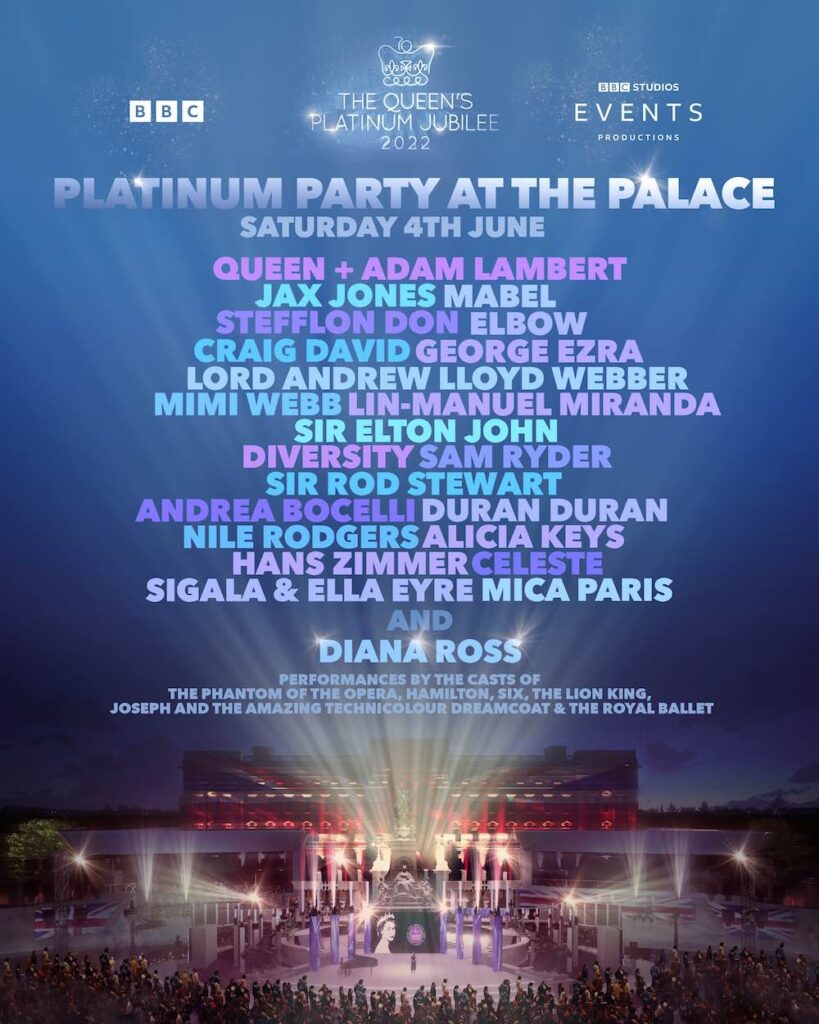 Tags
Queen
Olumide JokotadeMay 19, 2022Last Updated: May 19, 2022
Check Also
Close
Back to top button
Close
We use cookies on our website to give you the most relevant experience by remembering your preferences and repeat visits. By clicking “Accept”, you consent to the use of ALL the cookies. In case of sale of your personal information, you may opt out by using the link .
Cookie settingsACCEPT
Manage consent