While reality star and model Erica Mena, Safaree’s ex-wife, claims he recently made public the very sex tape over which he is threatening legal action, the rapper-turned-reality star claims the reverse. Chatter about the Kimbella-starring X-rated video has persisted on social media for days, prompting Safaree to take to Twitter on Monday (August 15) to lament how it is affecting his personal life.

As his fans are aware, the 41-year-old also produces adult content for the website OnlyFans. However, some have speculated that his member is either fake or the result of deliberate lighting, framing, and angling because what was seen on OnlyFans wasn’t exactly the same as what was seen in the Kimbella-co-starred sex tape that leaked.

In response to accusations of “d*ck fishing,” which is the practice of exaggerating the size of anatomical things, Safaree shot back at detractors who claimed earlier images of his manhood were altered.

Safaree claims he is aware that his mother and kids would have access to the footage despite being persuaded by friends to record another sex tape to demonstrate that he is dealing with the genuine deal. 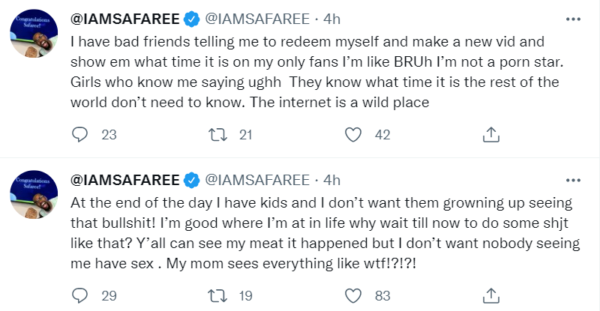 As of the time reported, it was unknown whether the “Love & Hip Hop” star would proceed with filing charges as he had previously stated.

Tags
Safaree Samuels
Ikedichim Chibundu Follow on Twitter August 16, 2022Last Updated: August 16, 2022
Check Also
Close
Back to top button
Close
We use cookies on our website to give you the most relevant experience by remembering your preferences and repeat visits. By clicking “Accept”, you consent to the use of ALL the cookies. In case of sale of your personal information, you may opt out by using the link .
Cookie settingsACCEPT
Manage consent