Eboni Ivori, the mother of London On Da Track’s infant child, is criticizing Shenseea and claims that Rajeiro Lee, the singer’s son, is acting inappropriately with her daughter. Eboni made serious accusations and criticized Shenseea for failing to raise her son properly in a series of Instagram Stories that she uploaded on Monday afternoon. 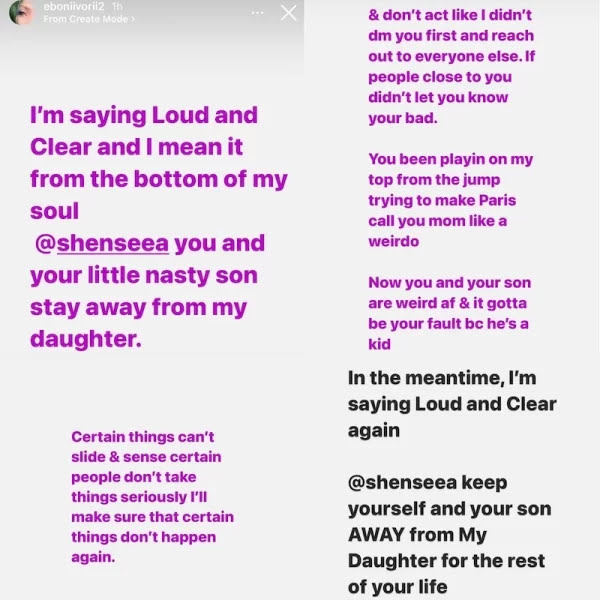 Even though Shenseea and London have not formally admitted to dating, there have been rumors that the two were lovers. According to Eboni’s article, the couple was not just intimately involved but also introduced their kids to one another and allowed them to spend time together.

Eboni claims that Shenseea wants Raj, Shenseea’s son, to keep his distance from Paris, her daughter. The ages of the two kids are similar. Shenseea was then called out along with her son as she was tagged. She also made a suggestion that maybe she had alerted London of the claims, but it was disregarded.

Shenseea and her people had been contacted, but the woman continued, and she had received no response. It also seems that Eboni was angry that Shenseea was around her daughter and wanted Paris to refer to her as “mom,” but this is not confirmed by the woman.

Tags
Eboni Ivori Shenseea
Ikedichim Chibundu Follow on Twitter November 15, 2022Last Updated: November 15, 2022
Load more
Back to top button
Close
We use cookies on our website to give you the most relevant experience by remembering your preferences and repeat visits. By clicking “Accept”, you consent to the use of ALL the cookies. In case of sale of your personal information, you may opt out by using the link .
Cookie settingsACCEPT
Manage consent