Today, Sylvan Esso let their freak selves shine with the release of a resounding new album, No Rules Sandy. Created primarily over the course of three weeks that Amelia Meath and Nick Sanborn spent in a small Los Angeles rental home at the beginning of 2022, it is both the fastest the band has ever made a record, and the most uninhibited. “Even if we weren’t feeling good, we would just sit down and try to make something,” Meath says. “Pretty much every day that we did that, we got a song that we liked.” 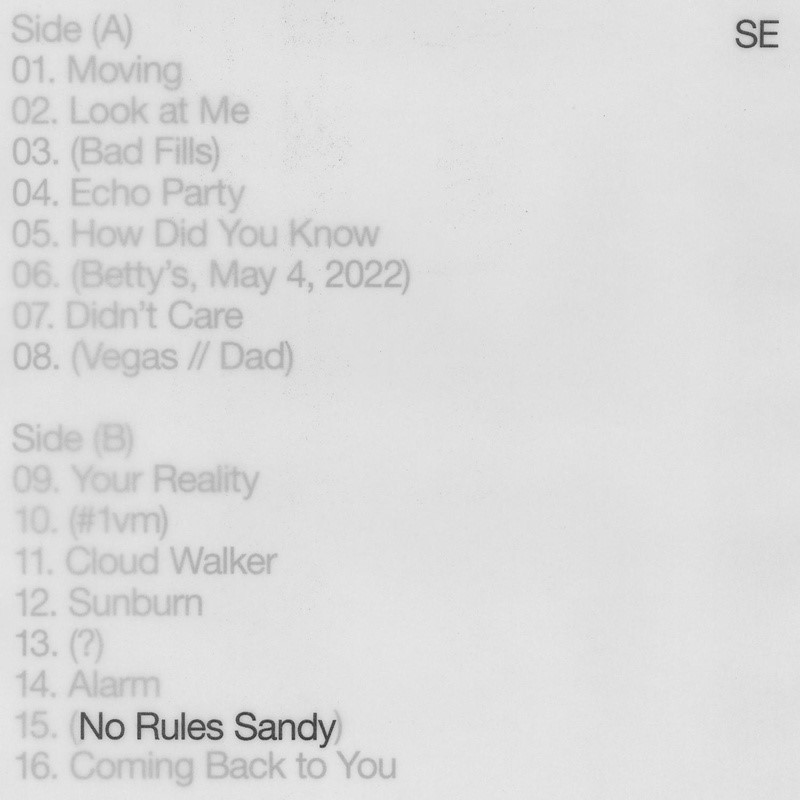 Out now on Loma Vista Recordings, No Rules Sandy is accompanied by a thrilling music video for the standout “Echo Party.” Directed by Lindsey Nico Mann, the visual follows Meath as she raves from a downtown, warehouse dancefloor to the mossy ground of an otherworldly forest. Over wobbling bass, warbling vocals and ecstatic promise of a party you may never be able to leave, an exhilarating tension emerges between the lightness and darkness of a good time.

“Echo Party” follows a series of similarly enthralling, emotionally complex singles, including “Sunburn,” “Your Reality” and “Didn’t Care,” and across the rest of No Rules Sandy, Sylvan Esso continue to leap from the frameworks of pop and electronic music into a wilder unknown. Between the band’s most frenetic production, cathartic hooks and strangest sounds to date, Sanborn says, “I want everything to feel like something you’ve heard before, but presented in a way you’ve never heard.”

Produced and written by Sylvan Esso, with additional recording taking place at their own Betty’s studio in Chapel Hill, NC, No Rules Sandy also features contributions from drummer TJ Maiani, string arrangements by Gabriel Kahane, and saxophone from Sam Gendel, plus an acoustic closing track unlike anything the band has done before, and a collection of six, intimate sonic diary entries tying everything together.

The music of No Rules Sandy has earned praise from The New York Times, NPR Music, Rolling Stone, Billboard, Pitchfork, NME, Consequence and beyond, in addition to appearances on NPR’s All Things Considered and more to be revealed soon. Since surprising the audience and announcing the album with a full performance at Newport Folk Festival, Sylvan Esso have brought the new songs to special DJ Nights in NYC and LA, sold-out arenas on the first leg of their massive summer and fall tour with ODESZA, and even the stripped-down studio of Tim Heidecker’s Office Hours Live, where Meath and Sanborn played alongside a slideshow of tasteful Steely Dan photos.

In the coming months, the band will not only return to the road with ODESZA, but will make their Austin City Limits debut in an episode airing on PBS on October 15th. That same day, they will also host their second annual Psychic Hotline Block Party at North Carolina’s Cat’s Cradle and Artscenter, featuring a lineup of The A’s, Arooj Aftab, Bartees Strange, GRRL x Made of Oak, Indigo De Souza, Joe Rainey, Joe Westerlund, Lambchop and more, in addition to a pop-up shop and record fair.

Tags
Sylvan Esso
Ayodeji Ibrahim Lateef Follow on Twitter August 12, 2022Last Updated: August 12, 2022
Check Also
Close
Back to top button
Close
We use cookies on our website to give you the most relevant experience by remembering your preferences and repeat visits. By clicking “Accept”, you consent to the use of ALL the cookies. In case of sale of your personal information, you may opt out by using the link .
Cookie settingsACCEPT
Manage consent