American rapper turned Journalist, N.O.R.E’s latest outburst on Twitter has started generating a handful of responses from fans and celebrities within the black hip-hop community.

N.O.R.E who co-hosts popular hip-hop culture podcast Drink Champs with fellow rapper, Dj E.F.N had earlier on Wednesday taken to Twitter to express his anger and displeasure at what he described as lack of respect from artists who ignore platforms that are built to promote the black excellence culture for more popular streaming platforms.

The rapper particularly called out popular platforms like Ellen DeGeneres’s, Oprah’s, and David Letterman’s shows who he believes are more frequently patronized by artists who should be patronizing industry based platforms to promote the culture. He, however, did not mention any platform of such he would prefer artists to support.

The Breakfast club, a music analysis show has now addressed the claims and outbursts of N.O.R.E.

Taking the outburst to be a shot at Cardi, Breakfast Club hosts, Charlamagne, Angela Yee, and DJ Envy leapt to her defence on Thursday by insisting that Cardi B has consistently supported he platforms that showed her love during her come up.

For Envy, Cardi B has evidently supported shows and showed up at concerts of DJs that helped her up while she was finding her feet. Expressing his support for N.O.R.E, Charlemagne explained that the act by major artists to ignore platforms that helped them up is disrespectful, and disappointing. Elaborating further, Charlemagne explained that even when the artist show up at black led shows, they ask that questions be censored, an act they do not put up when appearing on the more popular mainstream platforms.

N.O.R.E has also taken to Twitter to clear the air about who he was referring to in his previous tweets. According to the rapper, the tweets were not directed at Cardi B. 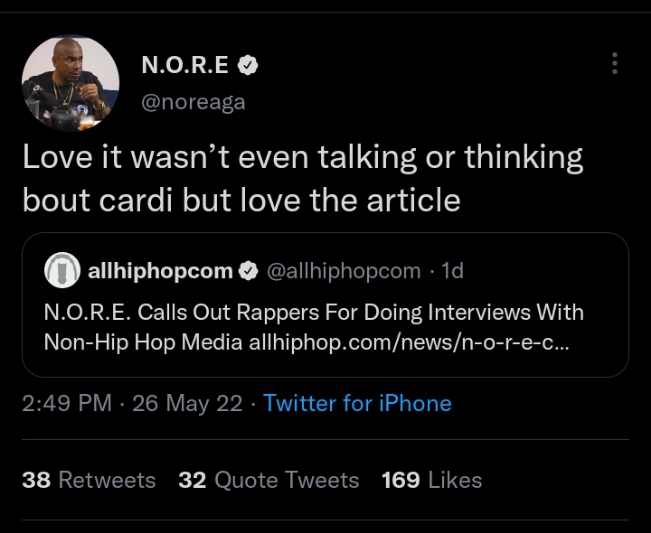 Tags
Cardi B Noreaga The Breakfast Club
Olumide JokotadeMay 27, 2022Last Updated: May 27, 2022
Check Also
Close
Back to top button
Close
We use cookies on our website to give you the most relevant experience by remembering your preferences and repeat visits. By clicking “Accept”, you consent to the use of ALL the cookies. In case of sale of your personal information, you may opt out by using the link .
Cookie settingsACCEPT
Manage consent