Chris Brown has been hinting at the arrival of a new album for some months. When the R&B artist posted an image on his Instagram with the caption “Breezy,” things eventually began to escalate last month. A short while later, he revealed that Breezy would be released on Friday, June 24.

As we anticipate the arrival of Brown’s tenth studio album, his contemporaries are letting us know what to anticipate. Tory Lanez posted a tweet earlier today promoting Chris Brown’s album.

“Mark my words ….. @chrisbrown is going to drop in a few … AND HES GUNNA FUCK THE WHOLE SUMMER UP I heard the album dawg … LIEK 3 months ago ….the nigga got this song called “pass the time” …..OMGSH but beyond that whole album is all BANGERS . WATCH NIGGA.” 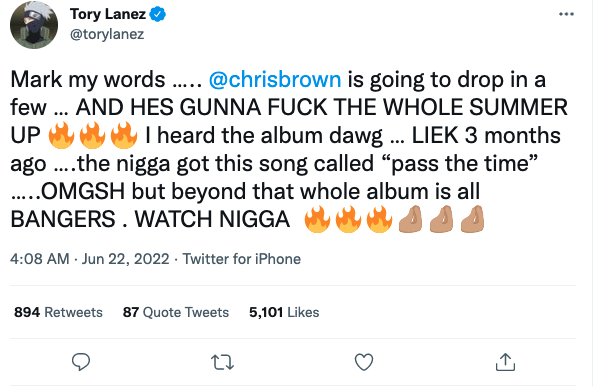 As Lanez stated, Brown’s record was available for him to listen to months ago, and he was just as enthused then about Breezy as he is today. Lanez originally discussed the album on Twitter in April.

“This N***a @chrisbrown played me some new music a few nights ago,” he tweeted. “THIS N***A IS BOUT TO GO SO CRAZYY ….. every song was a banger! Like every one.”

It has been verified that the Canadian singer-cum-rapper will also be making an appearance on Brown’s upcoming album.

Tags
Chris Brown Tory Lanez
Ikedichim Chibundu Follow on Twitter June 23, 2022Last Updated: June 23, 2022
Check Also
Close
Back to top button
Close
We use cookies on our website to give you the most relevant experience by remembering your preferences and repeat visits. By clicking “Accept”, you consent to the use of ALL the cookies. In case of sale of your personal information, you may opt out by using the link .
Cookie settingsACCEPT
Manage consent