Despite the fact that many people were unaware of it, the professional relationship between Mase and Fivio Foreign became the main topic of discussions regarding contracts. Numerous reports have been published about artists discussing their contracts, frequently in a negative light as they lament being taken advantage of.

Artists frequently sign contracts before getting their big breaks or viral moments that help launch them into the mainstream, and while it is uncertain if Fivio read between the lines of his arrangement, he stated that when he signed with Mase, he received a $5,000 advance.

Later, Mase would speak up to tell his side of the tale, saying that while he had given Fivio $5K, it wasn’t the only payment the Drill rapper had received. After the discovery, Mellow Rackz joined Fivio as he returned to tease a brand-new song.

The two have been positioning themselves as the next “it” couple in rap, and in Fivio’s music video, she kisses him all over his face while he performs a new single that samples Mase’s 1997 smash, “Tell Me What You Want,” featuring Total. Check out the sample and listen to Mase’s classic below. Fivio’s song has been hailed by his admirers as having the potential to go viral.

Tags
Fivio Foreign Mase
Ikedichim Chibundu Follow on Twitter August 4, 2022Last Updated: August 4, 2022
Check Also
Close
Back to top button
Close
We use cookies on our website to give you the most relevant experience by remembering your preferences and repeat visits. By clicking “Accept”, you consent to the use of ALL the cookies. In case of sale of your personal information, you may opt out by using the link .
Cookie settingsACCEPT
Manage consent 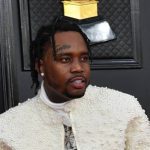 Using A Sample From Mase’s Classic Song “Tell Me What You Want,” Fivio Foreign Teases A New Song