Young Thug has said he really doesn’t want to hit 45 or 50 years and still making albums.

Thugger already has in view how he wants his future to go and continues to make moves that would guarantee a lifetime of success, as he reveals in a recent interview about his plans to retire from rapping twenty years from now.

The YSL boss, together with his signee, Gunna, are being featured as the new cover stars this month for Billboard, disclosing to the publication how he doesn’t look forward to always being an artist, as he has his focus pegged on other career paths, understanding that ten years from now, he will need to be there for his kids in order to set them up for successful lives.

Bearing that in the fore of his mind, Thug says he would want to hang up his microphone within the timeframe of the next twenty years.

“I just don’t want to be a certain age and still rapping. I’d rather start doing a different thing. It ain’t even about nobody else, it’s just about me and my integrity and how I want to be looked at. Why would I be 45 or 50 years old trying to record albums? When I’m 50 years old, I know 80% of the world is motherf*cking 15 to 24. What the f*ck am I trying to make an album at 50 for? I got kids that gonna need more attention from me in 10 years,” said the rapper.

Tags
Young Thug
Ikedichim Chibundu Follow on Twitter March 10, 2022Last Updated: March 31, 2022
Check Also
Close
Back to top button
Close
We use cookies on our website to give you the most relevant experience by remembering your preferences and repeat visits. By clicking “Accept”, you consent to the use of ALL the cookies. In case of sale of your personal information, you may opt out by using the link .
Cookie settingsACCEPT
Manage consent 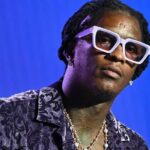