Half of the City Girls duo, Yung Miami, is revisiting her struggles of joggling motherhood, career and the death of a loved one.

Sadly, the show must go on for entertainers and industry people even when their personal lives are falling apart. They just have to hold it together because they have a career, a brand and a growing fan base to protect. So was the case for Yung Miami back in 2020.

In the later part of 2020, Jai Wiggins, the father to Yung Miami’s son, was gunned down during a shooting. Although the female emcee is yet to speak on the incident, she has always spoken fondly of the late Wiggins. Prior to his passing, Wiggins was reportedly receiving treatment at a hospital, and it was also during this time that Yung Miami was going hard at work, carrying on with what needed to be accomplished.

“I filmed p*ssy talk video while my baby daddy was on his death bed,” tweeted the City Girls rapper, referring to their collaboration with Doja Cat. “I cried so hard and long between scenes one of the hardest days of my life.” Fans had to revisit the music video, as it was almost impossible to tell that the rapper was deeply saddened that day.

Here’s a reminder of the visual:

Tags
Yung Miami
Ikedichim Chibundu Follow on Twitter March 17, 2022Last Updated: March 31, 2022
Back to top button
Close
We use cookies on our website to give you the most relevant experience by remembering your preferences and repeat visits. By clicking “Accept”, you consent to the use of ALL the cookies. In case of sale of your personal information, you may opt out by using the link .
Cookie settingsACCEPT
Manage consent 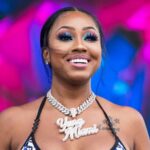