On their eleventh studio album, these seasoned Nordic nihilists sound both technically exact and humorously absurd, edging ever closer to the extravagant pomposity of symphonic metal but with a fierce hardcore edge that makes them tough to dismiss as pure pantomime. Deceivers is Arch Enemy’s strongest record in the Alissa era, without any doubt.

Of course, they also bring the massive hooks, and frequently they take flight on the back of these as they launch into rousing choruses, strong songwriting on display throughout, and Jeff Loomis’ solos, as expected, kill every time they are unleashed. They also incorporate additional elements that increase the album’s dramatic scale. 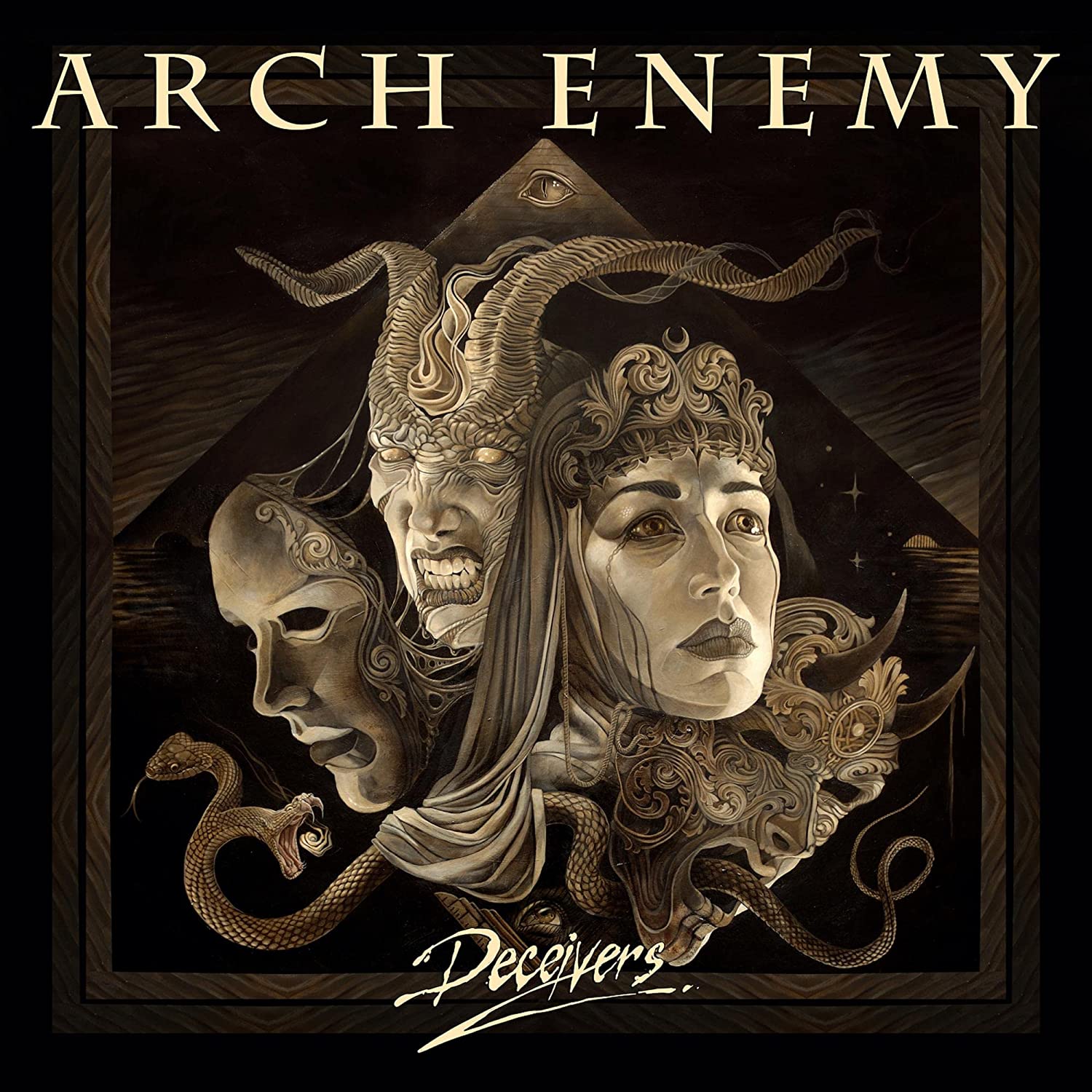 As is the norm with the Heavy Metal genre, the pictorial representation of their art can be a tad grotesque at times and could come off as scary to most, which is the case with this one. The band members are here represented by the heads seen emerging from a prism box of some sort. In addition, there are two mask-like faces on both corners of the photo, with just one face appearing a bit normal. The masks possibly paint the picture of, well, Deceivers.

Beginning with the opening track, “Handshake with Hell,” we hear Alissa’s dynamic range in all its glory. The song is a strong statement whereby she throws it all down and puts it all on the table. The sharp contrast between the clean and the dirty is what takes a really well written and makes it great.

“In the Eye of the Storm” gives us some serious Gothenberg vibes. Not only does the melodic nature of the track harken back to the glory days of the Swedish metal scene, the guitar leads and riffs are going to remind listeners of bands like In Flames, for example, and the striking tone they put on the map. The pre-chorus here is as thick and juicy as a delicious cauliflower steak and gets you hooked oh-so-fast.

Deceivers has incredible composition and production throughout, and this is most clear in “Sunset Over the Empire,” which serves as a virtual masterclass in how to write a four minute long extreme metal song. Lead guitars are flying everywhere, there is melody over a pulsing and sturdy bass end, and there is a chillingly mesmerizing chorus that most metal bands can only dream of. Not to mention the deliberate pause for some live fist-pumping in the air.

The song “One Last Time” is bursting with fire and volume. Once more, the band provides a variety of sounds on top of sounds without being intrusive. The song’s artistry can also be found in the small elements, such as the way Sharlee D’Angelo uses his bass to round out the sound during this solo or the way Alissa truly strikes the tune with her voice.

The closing track, “Exiled from Earth” has some brilliant leads from Jeff Loomis that adds a great deal of texture and vibrance. Anthemic and accessible, like most of this record, I can see this being a great closer for the live show as it both seems to wind things down and leave you wanting more at the same time. Not bad for a band who, not long ago, celebrated their 25th anniversary. Hopefully this is the start of a whole new, exciting phase for them.

Deceivers is a rather uplifting record that is more beautiful than darkness. The key here, though, is that band keeps its edge. There is a sense of freedom, pride and escapism in what the band has presented.

Producers that worked on the album are Daniel Erlandsson, Jacob Hansen & Michael Amott.

Load more
Tags
Arch Enemy
Ikedichim Chibundu Follow on Twitter August 15, 2022Last Updated: August 15, 2022
Back to top button
Close
We use cookies on our website to give you the most relevant experience by remembering your preferences and repeat visits. By clicking “Accept”, you consent to the use of ALL the cookies. In case of sale of your personal information, you may opt out by using the link .
Cookie settingsACCEPT
Manage consent