B.o.B recently released a new album, “Better Than Drugs,” in advance of his first U.S. tour in eight years. The 33-year-old has taken a bit of a “hiatus” from the popular music scene, but he is now anxious to resume things as they were. “Better Than Drugs” features guest appearances from Baby Tate, Tech N9ne, Money Mu, and more. It also features production from Hang Dynasty, Kid Hazel, Slaughter Gang, and Cash Clay. For fans of B.o.B.’s versatile style, you will be pleasantly surprised with what the album has to offer. 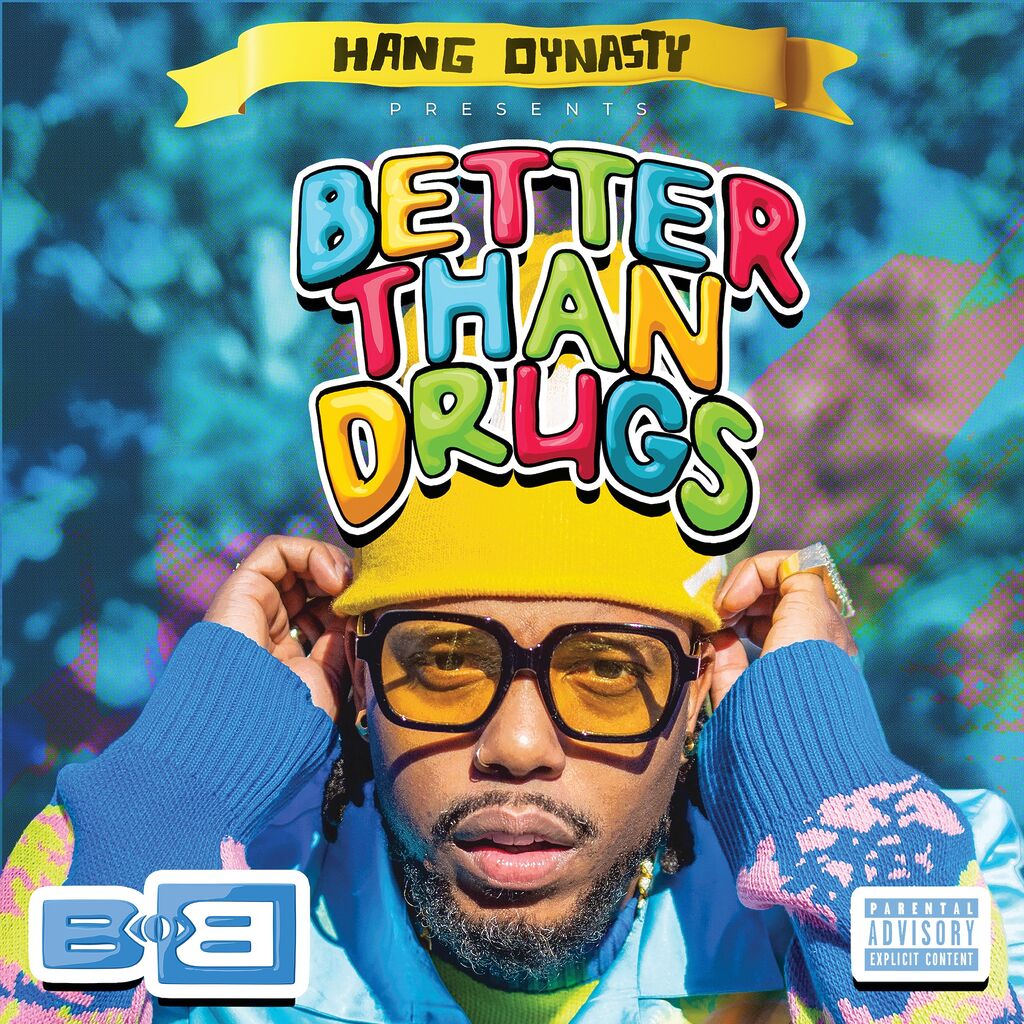 B.o.B is seen in this colorful album cover rocking a yellow version of a smaller bucket hat that was matched with a large sunglasses with tints of yellow. Looking fresh and neatly cut, he poses for the cam, holding his hat and showcasing the designs splashed on the hands of his sweatshirt. How colorful everything apparently gets when high on drugs was also portrayed, only this is Better Than Drugs.

The 12-track Trap Hip-Hop arrival, which hit streamers has the “Nothin On You” crooner’s production company, Hang Dynasty, tapping names like Slaughter Gang, Kid Hazel, and Cash Clay to assist him. As for features, the multi-platinum artist racked up a solid list of recruits including Tech N9ne, Baby Tate, Money Mu, and Jace of Two-9. On top of that, he also nabbed TTO-KT’s help on two titles – “Tulum” and “Money Slidin.”

The opening track “Ocxn Waves” has B.o.B and Ray Moon on a trippy trap vibe that professes Love as “the only wave high…”. The sultry vocals of Ray Moon and B.o.B’s braggadocio is evident in this track that beautifully opens the album. Next comes a TechN9ne-featured track that says he’s the “nigga now”; a track that showcases how he’s perceived amidst living the life and having fun while at it. It also hints at ‘Alpha male” status.

Black Boe and Baby Tate deliver on “Bad Lil Bish” alongside B.o.B in this hard Bass track that sell the streets and its sex-oriented side. On “Scenic Route,” B.o.B spits facts, dropping real life nuggets while admitting to enjoying every second of being high. B.o.B’s prowess is again seen in “Blue” as the track touches on the theme of love, sex and dealing with the responsibility thereof. However, it ends with a hilarious dialogue between a pharmacist and a customer looking for the “plan B” and seems to pass a message on being accountable for the aftermath of post-sex.

“Jace Interlude” has the Grammy nominee admitting to cheating and the resulting heartbreaks thereof. Fuegogamo jumps on the “latina-laced” hip-hop collaboration with B.o.B on “Pablo” with themes of drugs, money and women evident in the lyrics. Following “Pablo,” B.o.B and Ashoka’s “Reminisce” hints on themes of sex, betrayal and on being the “Top Dog” nonetheless.

B.o.B, TTO KT, and Jace jump on “Tulum” – a smooth trap track that has them on admissions of their likes for drinking and indulging and still making big moves. Money Mu on “No Cut” is typical trap. Sleek, smooth and full vibes. “Money Slidin” has B.o.B and TTO KT jamming on the trap track and delivering very cool verses that will appeal to trap ears more.

The last track, “Vinama,” has B.o.B in his elements as he raps on life-issues that speaks on trust, envy, backlashes and friendships. Indeed, it’s ‘the calm before the storm’ as the fade brings the listening journey to a calm finish.

The perks of the fast life that bring with it jealousy, backstabbing and infidelity.

Load more
Tags
B.o.B
Ikedichim Chibundu Follow on Twitter August 28, 2022Last Updated: August 28, 2022
Check Also
Close
Back to top button
Close
We use cookies on our website to give you the most relevant experience by remembering your preferences and repeat visits. By clicking “Accept”, you consent to the use of ALL the cookies. In case of sale of your personal information, you may opt out by using the link .
Cookie settingsACCEPT
Manage consent