From Seed To Sale

The début double-disc album, “From Seed To Sale,” by California icon Berner, has expanded his illustrious discography. The latest album from The Taylor Gang signee features two 15-track volumes with a total of 30 tracks. Naturally, he brought along a few buddies. Cozmo, a frequent collaborator of Berner’s, has three appearances, and Mozzy, Wiz Khalifa, CJ Washington, and Seddy Hendrinx also contribute to the album.

The most unexpected collab on the new record is with JMSN on “Hidden Messages.” This album, which follows his last studio effort, the deluxe edition to 2021’s “GOTTI,” containing actual unreleased voice notes from John Gotti, is proof that he continues to produce top-notch music even as his Cookies cannabis company grows internationally. 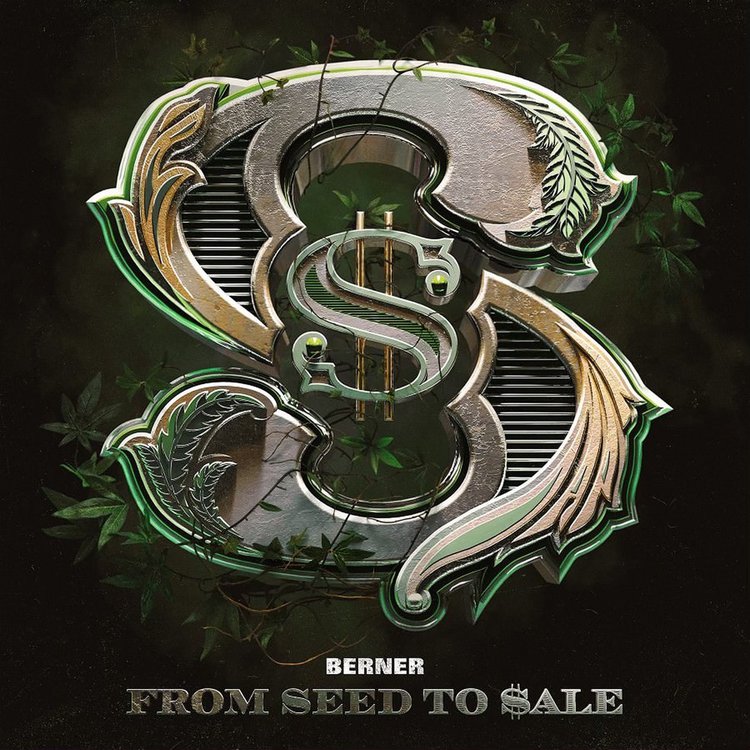 The LP opens with an intro by Bohdi and he summarizes the album in few words, makes references to “seeds” and speaks on a “ganja hero’s” journey. The next track, “Still holding,” follows the cannabis-related theme of the project as Berner tells his stories. The beat goes really hard and his delivery is top-tier. The background vocals of “still smoking herb” that begin the track and lasts through the verses, add a sleek touch to the song’s composition. The first featured acts on the album, Cozmo and CJ Washington appear on the track, “Back Around.” A definition of good music. The Hip-hop and R&B feel to the track is quite the pleasant listen and the trio’s delivery is smooth. There’s a lot of slick talk and braggadocio but they also do a decent job of painting vivid pictures. “Conglomerate” is the next track with guest artists that include Mozzy and Cozmo who both show up with their sprinklers of awesomeness. The chill Hip-hop beat arrangement is pretty impressive too.

Wiz Khalifa gets invited to “Spin The Block” and he does just that with his OG delivery. Featuring only Cozmo this time on “No More Deals,” Berner continues to share with his listeners how much he’s had to go through to get to where he presently is. Seddy Hendrinx on “If It’s Up” dishes that Trap feel for Trap lovers even though the central, hardcore Hip-hop vibe isn’t lost. The background vocals and cool Piano chords that end the track are sublime and fitting. Berner features Hollywood on “Like This” and this track sees Berner in his element, bearing the message of growth, belief and the fulfillment of success which cannot be mistaken. The duo tell their story amidst all the slick talk, expressing gratitude for the blessings.

“Pain,” featuring The Jacka and Seddy Hendrinx, and “Hidden Messages” are great musical compositions and Berner doesn’t hesitate to keep on telling entertaining tales. The closing track of the LP is a “Bohdi Outro.” It’s more like a voice note where a Marijuana-linked business transaction is shared, hinting at a good deal in the works which, come to think of it, is a really good way to end the album, seeing as the name is “Seed To Sale.” You could tell that a straight line runs from the Intro and connects with the Outro, showing you the bigger picture and bringing the listening journey to an elegant end.

The album is largely a “dope”-themed project as almost all the tracks have a linking to Marijuana in addition to other slick-related topics.

The album’s production was taken care of by CashMoneyAP, Traxx FDR & TraxxxFDR.

Load more
Tags
Berner
Ikedichim Chibundu Follow on Twitter October 31, 2022Last Updated: October 31, 2022
Check Also
Close
Back to top button
Close
We use cookies on our website to give you the most relevant experience by remembering your preferences and repeat visits. By clicking “Accept”, you consent to the use of ALL the cookies. In case of sale of your personal information, you may opt out by using the link .
Cookie settingsACCEPT
Manage consent