The ideal BROCKHAMPTON record is “The Family.” It strikes the perfect balance between upbeat and melancholy periods, and the change in sound from earlier works makes for a captivating full listen. Even though it’s sad to see them go, they couldn’t have ended on a higher note. It’s a fitting end to one of hip-most hop’s impressive catalogs of the past ten years.

The album’s production is unquestionably a step forward from all of the prior releases. Although there are times of complete contrast, pitched-up soul samples and dusty soul samples rule supreme. There are also plenty of effects and ad-libs. The tracks’ final chapter is a seamless front-to-back listen, with several smooth transitions between them. 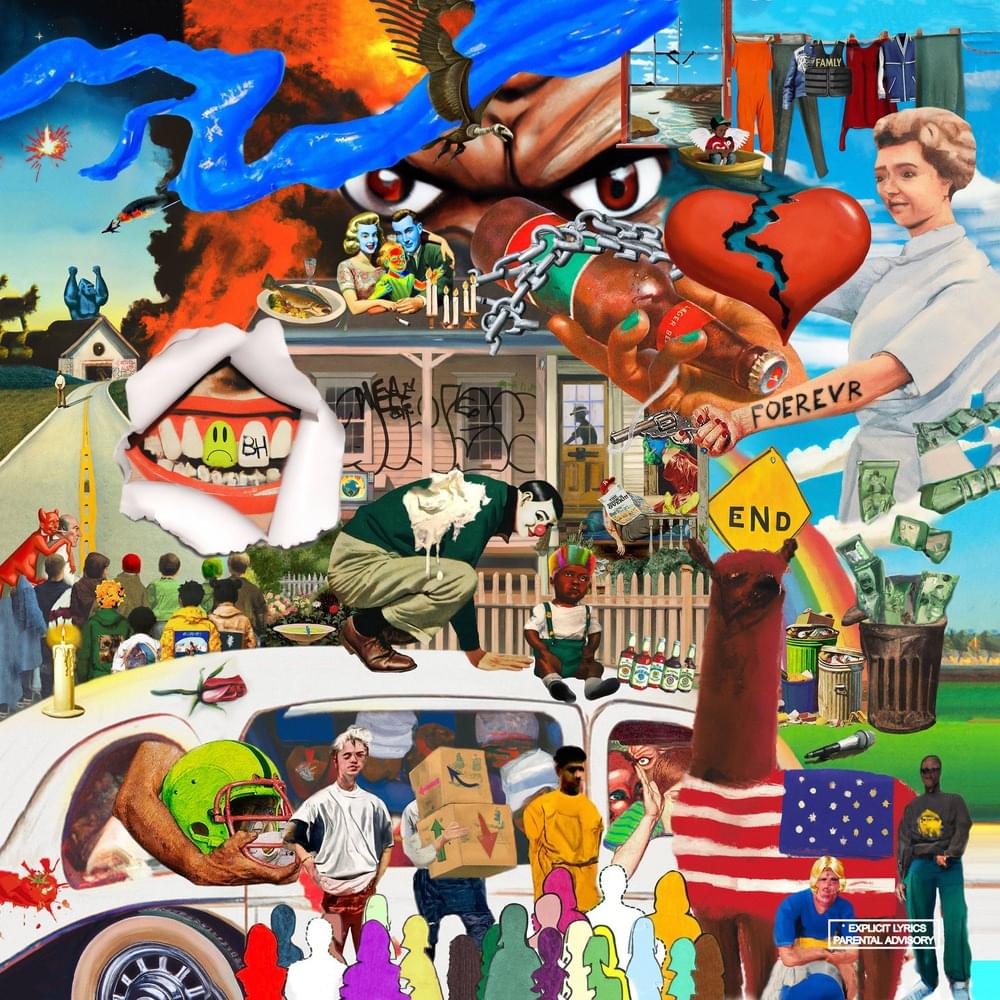 Though pretty colorful, the cover for this album is also pretty chaotic at first glance, forcing you to take another look, to observe and absorb the art in details. There just seems to be a lot going on, from some social vices to funny scenes to everyday life and people going about their different businesses while a pair of seemingly angry eyes looking down at everything from above.

The Family is described as “a story about BROCKHAMPTON” by the band, whereas Abstract describes the album as “the truth.” He raps, “I had to save the truth for the last shit/ Anything I said before this was passive,” in the album’s opening track, “Take It Back,” to explain this. The song is especially upbeat and gives the impression that Abstract is looking back on the band’s history with confidence. Instead of a somber and contemplative sorrow, it positions the record as a celebration of death. He says that he still loves the BROCKHAMPTON bandmates, though the gang is scarcely on speaking terms.

Abstract plainly laments the passing of an era as “My momma asking me, Ian why don’t you keep the band together?” throughout the instrumental that propels “RZA” ahead. Everyone who is a fan of BH, even the band themselves, seems to be asking this question. With its shaky sub basses, “Basement” was made for the dance floor. It wouldn’t sound out of place at a Boiler Room performance. On the other hand, the song “Any Way You Want Me” is influenced by the 1960s style, trading in the thunderous drums and bass for mellow guitars and a live, lo-fi drum set.

The pounding “Gold Teeth” makes reference to label commitments and difficulties within the group, while “All That” discusses the group’s past dramas as well as expectations and the strain of stardom. Hip-hop enthusiasts are often excited by soulful, Kanye West-like beats, and that is exactly what you get in “The Ending.” You get to learn about Kevin Abstract’s outspoken, religious, and brotherhood love days in addition to his bothersome fall-off, in addition to the excellent beat. The two perspectives are presented with a certain level of tranquility that is almost soothing.

The final tune, “Brockhampton,” is a time of reflection in which Abstract expresses his most genuine emotions to date. “Joba, you’re the most musical motherfucker. Matt, I know you’re a perfectionist but now you’re free. Dom, ain’t nobody fucking with you lyrically. Merlyn, nobody can match this n*****’s energy,” he mentions each band member by name, expressing his love and admiration for them as well as his outlook on their future careers as he talks about how his own actions affected his relationships with the other members of the group. It is accompanied with a string score that has a cinematic vibe and feels like the end credits from an ancient film.

This album is an enormous, unraveling homage to all the turns and bends BROCKHAMPTON’s journey took. The band provides fans with an intimate look at some of the difficulties they have encountered.

Load more
Tags
BROCKHAMPTON
Ikedichim Chibundu Follow on Twitter November 18, 2022Last Updated: November 18, 2022
Check Also
Close
Back to top button
Close
We use cookies on our website to give you the most relevant experience by remembering your preferences and repeat visits. By clicking “Accept”, you consent to the use of ALL the cookies. In case of sale of your personal information, you may opt out by using the link .
Cookie settingsACCEPT
Manage consent