Dayseeker’s music significantly shifts to the pop realm with “Dark Sun,” yet it never loses the band’s signature openness and vulnerability, which is what makes them so amazing. One of the top all-around vocalists in the metalcore industry, Rory Rodriguez is the band’s front-man and lyricist, which obviously gives the album an edge, but it is so much more than that. 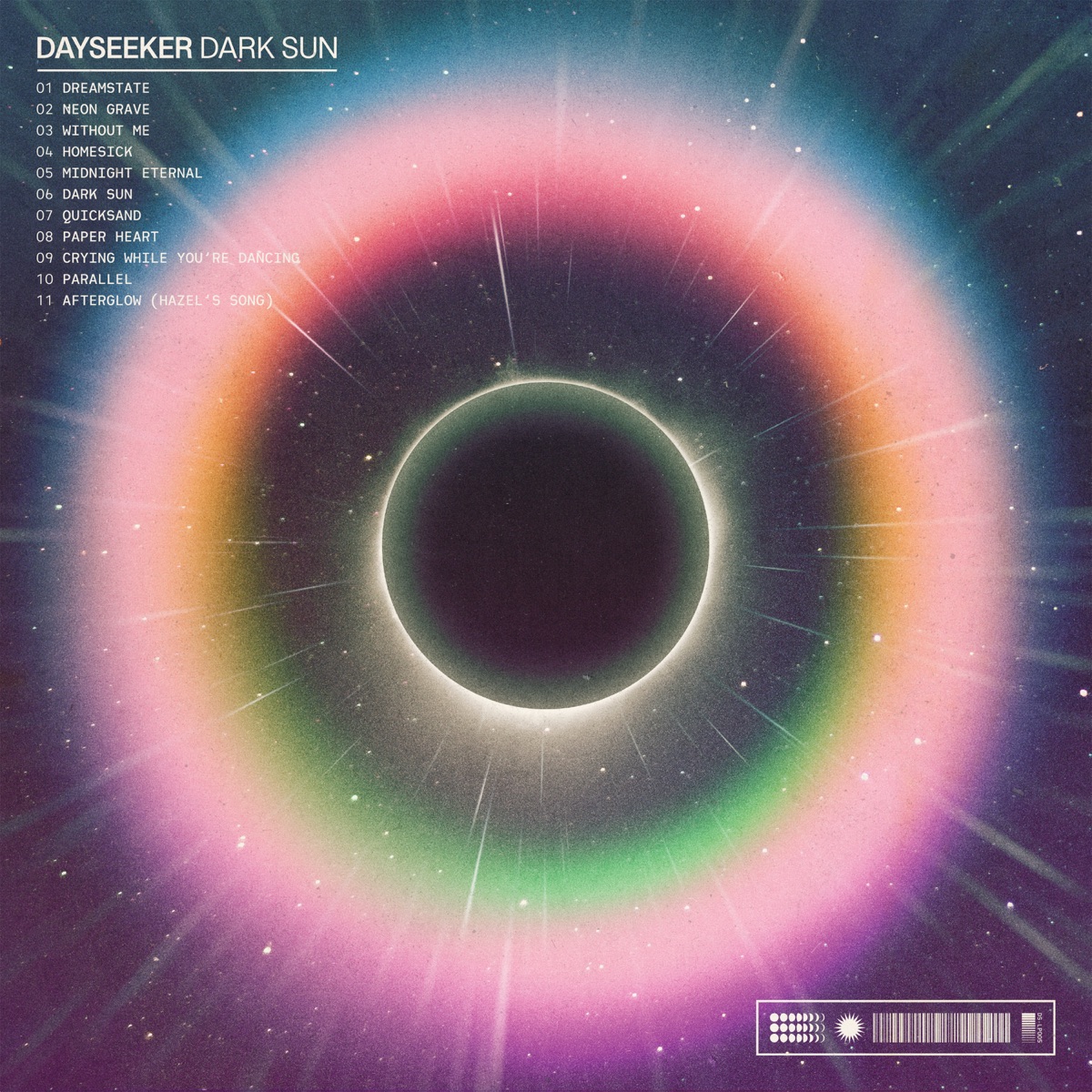 A solar eclipse of some sort seems to be happening on the album’s cover art. The sun may have been shaded but not its bright, darting rays of light nor the colorful rings encircling it for its brief period of being a Dark Sun.

With “Dreamstate,” “Neon Grave,” and “Without Me,” the band successfully transitions from the post-hardcore style they explored on Sleeptalk to the more upbeat elements of Dark Sun. The hardest songs on the album contrast downtuned guitars with the vibrant synths that run throughout the whole thing. One of the most alluring hooks of the year may be found on “Without Me.”

The album really starts to dive into its slower, warmer, neon heart with “Homesick,” where the chunky rhythms and gloomy vibe are exchanged for gentle synths and a shimmery soundscape while still maintaining the band’s identity. This is after the addictive key-synth breakdown in “Without Me.”

Mid-album cut, “Midnight Eternal,” due to its relative minimalism, is a beautiful song that will take many a little while to warm up to. However, the absence of guitar work creates a space that really lets the production shine; the 808s pop and the crisp snares run in a pattern that best describes the record as a whole: hypnotic.

The album’s title track, “Dark Sun,” is a tremendously dancey, infectious song complete with lovely falsettos and a very distinctive key-synth melody, even though it is rooted in the same synth-pop backdrop as the other songs. The song is upbeat from the opening notes, and flawless production prevents the droning atmosphere and forceful EDM-style pounding from drowning out the soft vocals.

Once more slowing down the beat, “Quicksand” switches out the neon piano keys for more natural-sounding ones. The Band Camino’s Spencer Stewart contributes a verse that effectively contrasts Rodriguez’s higher cleans with a deeper yet still smoother tone that is more in keeping with the track’s more organic feel. One of Rodriguez’ already turbulent discography’s most heartbreaking songs is “Paper Heart,” a sparkling ballad that highlights his poetry. While other songs use shiny melodies to cover depressing themes, “Paper Heart” is personal and open, and in my opinion, is Dark Sun’s unquestionable tearjerker.

The album’s final two songs, “Afterglow (Hazel’s Song)” and “Crying While You’re Dancing,” both retain a sense of the intricate instrumentation that some listeners may find lacking from the album as a whole. The latter features layers of keys, synths, and crisp percussion that are accented by hints of a distorted guitar lead in the second half. “Afterglow” may be the most comprehensive song, with something for everyone, and it culminates on a distortion-wrapped plea that caps the record off perfectly.

A significant amount of Dark Sun deals with the death of Rodriguez’ father, a difficult and very personal subject. The album loosely tells the story of the vocalist’s recent struggles, starting with the death of his father and ending on a high note with the birth of his daughter, Hazel. However, the way it is expressed vocally and surrounded by chromatic instruments uplifts and comforts, oozing with a delicate warmth.

Load more
Tags
Dayseeker
Ikedichim Chibundu Follow on Twitter November 6, 2022Last Updated: November 6, 2022
Check Also
Close
Load more
Back to top button
Close
We use cookies on our website to give you the most relevant experience by remembering your preferences and repeat visits. By clicking “Accept”, you consent to the use of ALL the cookies. In case of sale of your personal information, you may opt out by using the link .
Cookie settingsACCEPT
Manage consent