HOLY FVCK finds Lovato with new clarity, recording the album completely sober. To say the album recaptures some of the rock energy of Lovato’s earliest work is accurate, but only to a point. Those looking for a peppy pop-punk record will find that, but only in quick bursts.

The album as a whole blends grunge, hard rock, industrial, and bedroom pop, and is surprisingly eclectic and oftentimes downright hefty. The singer’s vocals, which are still as clear and potent as ever, retain a constant from Lovato’s earlier work. Lovato receives assistance from Yungblud, Royal & the Serpent, and Dead Sara so she is not fighting her battle alone. 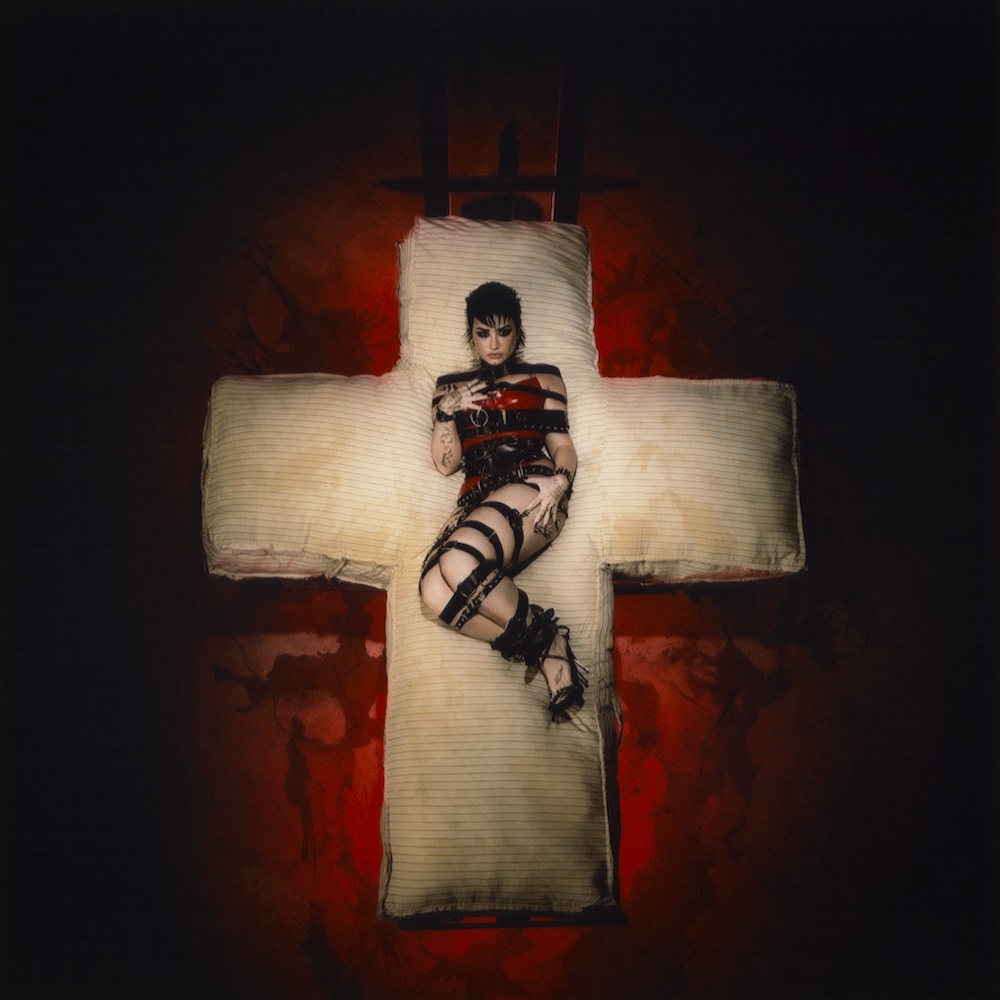 On a red background, Demi is seen tied up from shoulder to ankle as she lies face-up on a giant, soft, light-brown cross that seems to be made of foam and coated like a mattress. Quite literally, crosses depict sacred or well, holy stuff, and coupled with the idea of what is usually done on mattresses by adults, the album title comes together in that perfect depiction. Pretty sick.

The bass-heavy “FREAK,” which alternates between basic hard rock and trippy, half-time, spaced-out alt-rocker, kicks off the album on an eager and upbeat note. The song serves as both a rallying cry and a portrait of Lovato’s own turbulent life in recent years. Yungblud adds a verse and scream that are both well-placed. The record’s rest of the journey is a rollercoaster ride, so it’s a perfect beginning.

On “SKIN OF MY TEETH,” a straightforward song that’s contagious and anthemic, Lovato gives fans their first taste of her rock and roll aesthetic. It’s a wink and a nod to Lovato’s own struggles with its self-referential lyrics. On the bridge, Lovato’s vocals definitely soar to the utmost altitudes.

Few songs better capture the essence of Lovato’s early work than the punk rocker “SUBSTANCE,” which skillfully combines energy and melody. The lyrics, which despite the joyful atmosphere, ultimately take on a gloomy tone, really showcase Lovato’s maturity. On the Royal & the Serpent collaboration “EAT ME,” things take a very alt-rock turn. The song begins out dramatic and down-tuned, but towards the chorus, it becomes relentless. The breakdown on the bridge is more intense than anything offered by some contemporary rock acts.

The song “HAPPY ENDING” is one of the album’s standout tracks. Although it isn’t as powerful as some of the earlier work, it successfully blends melody and rock intensity with an in-tune vocal performance. On “HEAVY,” a fist-pumper that leans heavily on religious lyrical imagery, the rock makes a comeback.

Pop-punk at its purest, “CITY OF ANGELS” features big guitars, fast rhythms, and lots of attitude. In a song about switching up the mundane for something exciting and difficult, Lovato utilizes Los Angeles as the setting. “BONES” bounces all over the place, but the structured chaos it creates ultimately makes complete sense.

On the soaring chorus of “WASTED,” classic rock ferocity roars. Once more, Lovato’s vocals completely sparkle, piercing the distortion and setting the tone. Before “DEAD FRIENDS” picks up the pace again, “COME TOGETHER” keeps the momentum continuing with a similar mainstream vibe. Dead Sara contributes to the riff-heavy “HELP ME,” a caustic kiss-off song with a contagious alt rock intensity.

In addition to being a memorial for Lovato’s pop music, “Holy Fvck” also heralds the birth of a new artist. It’s the beginning of a brave new era as the musician delves into this fierce sonic realm while also honouring her musical heritage.

Load more
Tags
Demi Lovato
Ikedichim Chibundu Follow on Twitter August 19, 2022Last Updated: August 19, 2022
Check Also
Close
Load more
Back to top button
Close
We use cookies on our website to give you the most relevant experience by remembering your preferences and repeat visits. By clicking “Accept”, you consent to the use of ALL the cookies. In case of sale of your personal information, you may opt out by using the link .
Cookie settingsACCEPT
Manage consent