One of the bands who completed unfinished work during the global shutdown was Detroit Rock City’s “Eva Under Fire,” led by front woman Eva Marie (Amanda Lyberg), a rocker by night and a therapist by day. Following the success of their single “Blow” with Ice Nine Kills Spencer Charnas, the much anticipated album “Love, Drugs & Misery” succeeds quickly, which is the band’s sophomore release since their début in 2015. 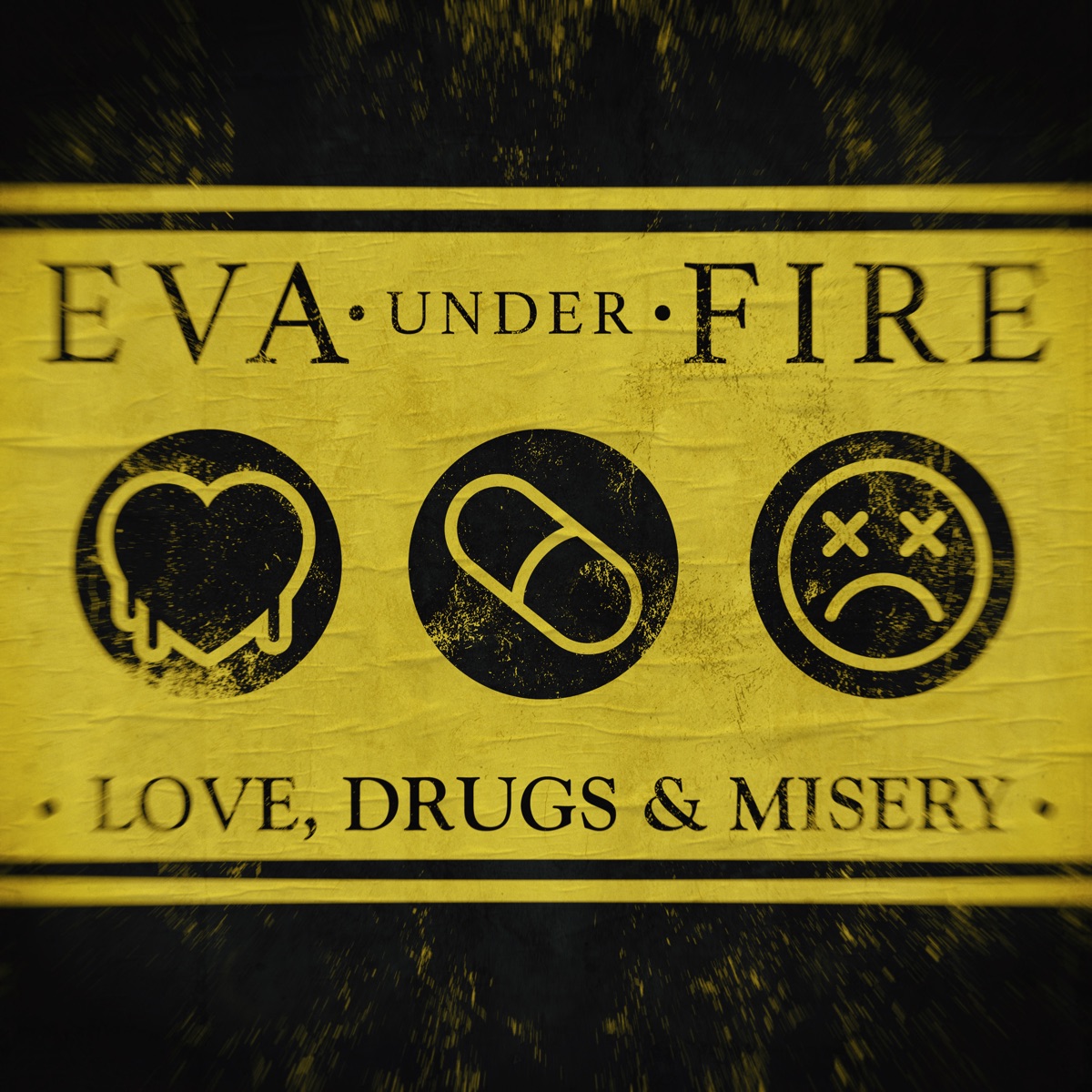 Sandwiched between the band name and album title are three emoji-like icons which is pretty self-explanatory, though the album title beneath icons lend better deciphering and meaning to them.

The band’s 12-track album opens with “Blow.” The hard rock-and-roll track is a bold opener that features Spencer Charnas of Ice Nine Kills, and contains lyrics that lean towards the themes of love and chaos. The picture painted in this track is one that sees two lovers being confrontational about their love and ‘ticking like a time bomb’ in the process. The lead soloist makes a great attempt at vocal delivery.

The second track, “Unstoppable,” begins in a strong tempo-like manner with the lead solo chanting “untouchable, unstoppable,” leading into a brief instrumental interlude which paves the way for the first verse. The song hints at love that stands against adversities thrown at it. This love doesn’t care what people say, and the Bonnie and Clyde analogy used in this song gives the listener the impression of how strong a love it is.

“With Or Without You” is an emotional track on the album that also is love-themed and following the lyrics, the listener can create a mental picture of how much this sacrificial type of love means to the soloist. The beats are smooth, a little upbeat and allows the soloist ride the track with grace while being vocally expressive. “Misery,” as the name implies, is a track that speaks on being in the wrong kind of love. The kind that leaves you miserable and has the soloist compare it to a ‘bad dream.’ The lyrics, the upbeat tempo and progression all sync wonderfully well to drive home the message.

“The Strong,” a smooth track that has a sonorous rendition by the soloist captures the ears of music lovers, delivers a strong message of resilience, bravery, courage, strength and brings some words of encouragement that says “you’re not alone.”

The next song feature From Ashes To New and is titled “Coming For Blood.” It begins with some sort of eerie, robotic voice, and the sound of an EKG machine can be heard afterwards. The tempo is typically upbeat but smooth. The lyrics speak of resilience and bravado. It seems to suggest that no matter how many times one gets knocked down and out, springing up again is possible. The short rap is also reflective of those themes and is another beautiful attempt to bring rock-and-roll and rap in unison.

Another featured track, “Comatose,” has Jonathan Dorr of Ego Kill Talent. The lyrics, “somebody save me from myself,” seem to suggest a dire situation in a relationship where being over in one’s head leads to bad decisions. Drug-related addictions and alcoholism while dealing with this troubled relationship were other topics dissected in the lyrics. The song also seems to suggest to anyone who may be going through something similar to seek help.

The album closer, “Give Me A Reason,” is another beautiful song and is a befitting close to the album. The lyrics gives the listener the impression of one that has undergone a lot to keep the relationship going without help from the significant other and in futility has held on for so long. And by way of offering solution, Eva under Fire suggests walking away from such a draining situation. The instrumentation is also pretty catchy and almost pop-like, blended with the usual loud lead and bass guitars.

Love-related themes can be found here and there all over the record; whether it’s unrequited love, true love, standing strong together in love, you name it. Also themes of resilience and courage can also be spotted on a few of the tracks.

Load more
Tags
Eva Under Fire
Ikedichim Chibundu Follow on Twitter September 24, 2022Last Updated: September 24, 2022
Check Also
Close
Back to top button
Close
We use cookies on our website to give you the most relevant experience by remembering your preferences and repeat visits. By clicking “Accept”, you consent to the use of ALL the cookies. In case of sale of your personal information, you may opt out by using the link .
Cookie settingsACCEPT
Manage consent