The Hell We Create

Fit for a King

“The Hell We Create” by Fit For A King is undoubtedly a strong metalcore album, but it doesn’t really offer anything new from the band. This could be viewed as a win or a loss depending on whether you wanted to see improvement from their previous albums or not. A win because it’s exactly what you would expect from them and they do it so well. In any case, the album’s ten well-produced metalcore songs will satisfy listeners throughout the more than likely two-year wait before the release of the band’s next album. 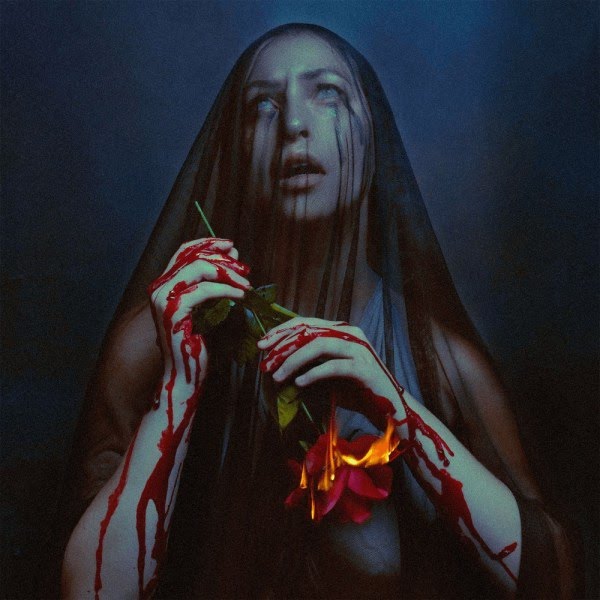 Unlike the Catholic pictorial representation of the biblical Mary,  the woman in the cover art wears a the countenance of a deeply troubled person. She rocks a see-through veil and with both bleeding hands holds a flower upsidedown with its clustered flaming petals also camouflaged as her heart.

One of the best album-opening hype tracks in recent memory has to be “The Hell We Create.” Before Ryan Kirby, the band’s front-man, lets out a terrifying scream, “THIS IS THE HELL WE CREATE,” the music gradually fades in with pre-war-sounding rhythms, a huge melodic guitar riff, big whoa oh vocals, and snare and crash smashes. This all builds into a massive drum roll. The boys launch right into a fast-paced verse with lots of double kicks. Trey Celaya keeps up the double-kick attack throughout the anthem’s chorus before the band pulls back and lays down a monster groove for the second verse, with Kirby adding some rap skills on top.

“End (The Other Side),” deals with the wife of the band’s lead singer Ryan Kirby’s near-death experience. The song displays the band’s distinctive sound, which features ferocious verses, contrasting emotion-filled choruses, and typically one or more crushing breakdowns. Speaking of breakdowns, the song finishes with Ryan Kirby screaming “DEATH COMES FOR US ALLLLL” to start the utterly earth-shattering breakdown, which amply illustrates what it would be like to lose your life partner.

The next song, ‘Falling Through The Sky,’ is a little more mellow and leans toward the band’s more melodic side. Ryan’s clean vocals and Trey Celaya’s beats are the focal points of the verses, which are relatively pulled back. The catchy chorus, which is sure to get audience members singing along during performances, is when the entire band joins in. After the second chorus, the song gets a little coarser before entering a brief breakdown.

For the song “Sink Below,” the band returns to their signature sound. Before the big melodic chorus riff is torn through by guitarists Bobby Lynge and Daniel Gailey as this tuna-sandwich comes with full power, a lo-fi rendition of the chorus whets listeners’ expectations. This brief preview of the song’s entire chorus is followed by a frenzied stanza that will have listeners thumping their heads. Trey rips some massive fills during the brief drum-focused pre-chorus before the band unleashes one of the album’s best choruses. It’s quick, catchy, has a killer tune, and ends with a massive soaring vocal line.

A ticking clock signals the start of “Reaper,” warning the listener that time is running out and that life is fragile. Here, the band deviates from the traditional song pattern and jumps immediately into the chorus. One of the strongest choruses on the album—and arguably their previous several albums—features a grinding riff from guitarists Bobby Lynge and Daniel Gailey, bassist Ryan “Tuck” O’Leary, with Ryan Kirby screaming his heart out over it.

‘What You Left Behind,’ the album’s closing track, begins with some lo-fi beats that build into a massive-sounding intro. The song’s second half maintains the momentum and is filled with ferocious lyrics and furious guitars that transport the listener to a pre-breakdown so chunky Heinz might turn it into a soup. The band then uses a breakdown to wrap up the album, which will have fans put on their best stank faces.

“The Hell We Create” is an emotional journey rife with fear, escape and the paralytic terror of the unknown.

Load more
Tags
Fit for a King
Ikedichim Chibundu Follow on Twitter October 28, 2022Last Updated: October 28, 2022
Check Also
Close
Load more
Back to top button
Close
We use cookies on our website to give you the most relevant experience by remembering your preferences and repeat visits. By clicking “Accept”, you consent to the use of ALL the cookies. In case of sale of your personal information, you may opt out by using the link .
Cookie settingsACCEPT
Manage consent