“Anyways, Life’s Great…” is a brand-new album from GloRilla, though marketed as her debut EP. She has a few of self-released mixtapes to her credit from 2019 and 2020, for starters, but this is her first release for Interscope via Yo Gotti’s CMG and her first since going viral, so that’s understandable. The new project comes bearing nine tracks accompanied by three features.

This EP features heavy-hitting rhythms in terms of production, so you could essentially play the entire record nonstop in any banging nightclub. Each song’s performance by GloRilla demonstrates that she was destined to be a rapper. Fans can learn more about who she is as a person from her boisterous personality. Each song benefits most from her charisma, and whatever lyric she delivers will make anyone feel ten feet tall. 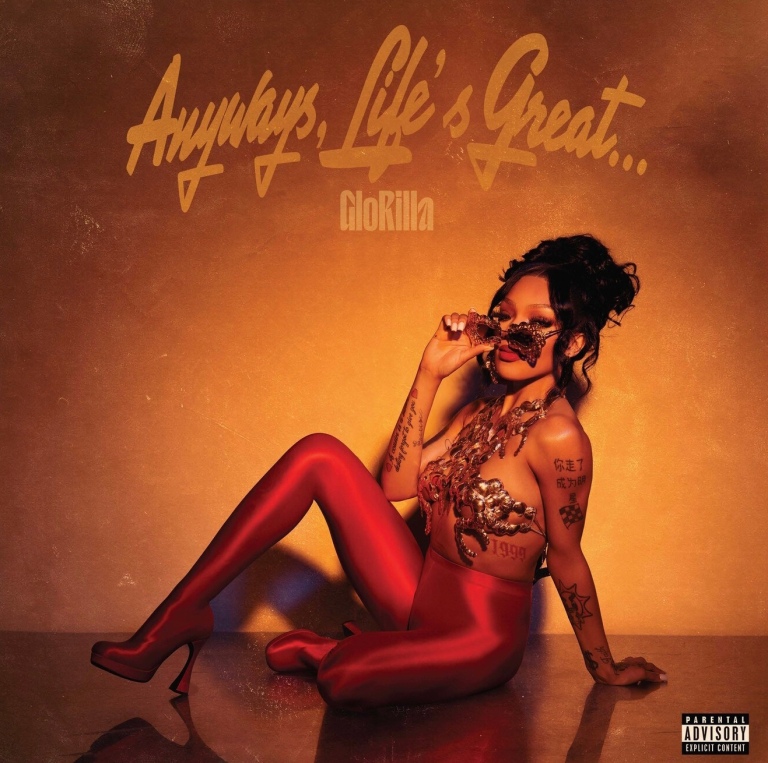 The femcee, in her scanty embroidered top over a red, tight and shiny leggings, sits on the floor next to a wall on which both her name and album title are boldly displayed. While the light hits her image gently, she gives herself some back support and balance with her left hand planted behind her and a leg slightly raised as she partly slides down her shades to reveal her eyes. Life must be great indeed.

Over a hazy Trap instrumental by ATL Jacob, “No More Love” opens the EP by airing out individuals left and right who used to be in her life, while “Phatnall” ventures into Detroit Trap territory and compares her coochie to fentanyl. From the keys and hi-hats to the lyrics that are essentially them talking their sh*t, the Cardi B remix of “Tomorrow” is just…ok.

Surprisingly, however, “Unh Unh” returns to the Detroit trap sound once more, noting that they don’t want to see gangsta b****es succeeding. She makes it clear in her lines that a gangsta like her will be there for much longer than the typical 15 minutes of fame.

GloRilla, over another piano-trap arrangement on “Blessed,” tells us that’s exactly how she’s feeling. In this song, GloRilla really kills it. Each line improves on the one before it. She essentially never misses. GloRilla enhances the song with her incisive delivery and constant boasting about the labels and haters who follow her every move as she continues to amass wealth.

On “Get That Money” she incorporates a whistling sample as Niki Pooh joins her to urge women not be afraid to ask their partners for money. GloRilla’s hard-hitting, mid-tempo flow blends well with the song’s fast-paced beat. By maintaining a constant level of GloRilla’s boss bitch energy, Niki Pooh delivers wickedly. This song is the ultimate bad girl anthem for the best girl’s night out since it showcases GloRilla’s southern, rugged flair and her humorous attitude.

The song “Nut Quick” is essentially a Memphis rendition of Missy Elliott’s song “1 Minute Man.” She also talks about how her previous relationship might have developed farther, but she ended it because he performed poorly, much like the Los Angeles Lakers. Fans will be able to see that GloRilla isn’t afraid to speak up for herself and what she wants because of her confidence and swagger in this song.

And the album’s penultimate track, “F.N.F. Despite the uproar, “(Let’s Go)” ends up being a fantastic addition to the EP. Thoughts are expressed over a gleaming beat in “Out Loud Thinking,” which marks the EP’s conclusion.

Expressing herself unreserved and raw while taking us through tough personal experiences as well as her challenging journey to stardom.

Load more
Tags
GloRilla
Ikedichim Chibundu Follow on Twitter November 16, 2022Last Updated: November 17, 2022
Check Also
Close
Back to top button
Close
We use cookies on our website to give you the most relevant experience by remembering your preferences and repeat visits. By clicking “Accept”, you consent to the use of ALL the cookies. In case of sale of your personal information, you may opt out by using the link .
Cookie settingsACCEPT
Manage consent