Use Your Illusion (Super Deluxe)

In honor of their Use Your Illusion I & II albums, Guns N’ Roses has published a super deluxe edition album that contains songs from both. Classic songs including November Rain, Civil War, You Could Be Mine, and Don’t Cry were featured on the albums when they were first released in 1991, along with renditions of Bob Dylan’s Knockin’ On Heaven’s Door and Live And Let Die by Paul McCartney and Wings. In retrospect, the albums illustrate the dichotomy of an outsider band that has grown to be the biggest band on earth while still aspiring to be rebels.

These recent releases have undergone a complete remastering process using high-resolution 96kHz 24-bit transfers from the original stereo 1/2-inch analogue masters. The Super Deluxe versions will include a total of 97 tracks, 63 of which are previously unreleased recordings. 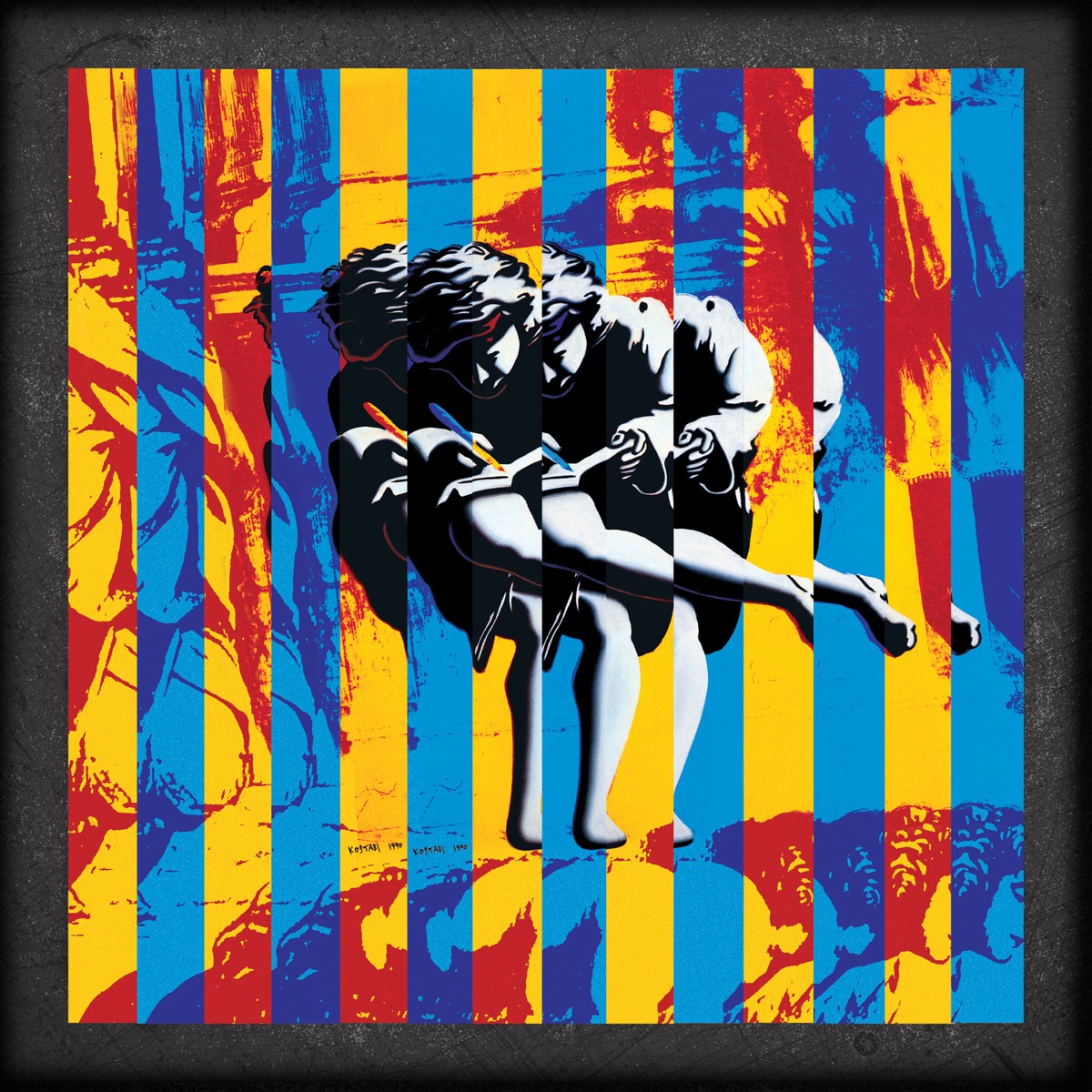 A child can be seen writing with a pen on a book that is placed on the thigh of his right leg which is crossed over the left for balance. The original shot is in black and white but got split into different slimmer frames of blue and yellow. Also notice that the pen being used to write is the only item in the original frame that isn’t colored black and white which creates a direct link to the split colored frames, showcasing how thoughts and imaginations, or in this case, Illusions, can be brought to life in the material realm.

The 77-track super deluxe album opens with “Right Nextdoor to Hell” and a Rock guitar intro with some hard percussion that makes this upbeat tempo track the suitable opener for the long listening journey as it also sets the mood. The piano chords also combine beautifully with the strings to give the track a pace-setting feel for the rest of the album. The background chants on the song comes in at intervals while the instrumentation interlude comes in often to slice things up. The next track, “Dust ‘N’ Bones,” talks about women and moods, admonishing the listener not to take things too seriously. The Rock-type beat arrangement is excellent and the backup vocals do a good job of supporting the soloist where needed.

“Live and Let Die” is some hard Rock with a beat arrangement that is chaotic but enchanting. The vocalizations come in at intervals between long periods of instrumentation interludes. There’s also a short reggae interlude as life, fate and tolerance are explored in the lyrics. “Don’t Cry” starts with a soulful intro that ushers in the soloist whose lovely vocals make a terrific combo with the chill beat. The piano chords and percussions all harmonize in beautiful fashion as the track comes to an end while the vocalist sustains until fade.

“Civil War” begins with a monologue on the failures of communication as the causes of war and fighting. The acoustic guitar and lead guitar chords mix in well on the track and gives it this smooth progression. Themes of war, fighting, peace, death, pain and the need for proper communication were all addressed in the lyrics as the soloist sings, “I don’t need a civil war.” Anyone that needs one needs a therapist first. The track ends with a monologue as heard in its intro, but this time, he asks, “what’s so civil about war anyway?” Healthy food for thought there.

“Mother/Paradise City” closes out the lengthy album. The track starts with cheering in the background and a stringy chords intro. The vocals come in shortly after its tingly intro which gives way to intervals of instrumentation interludes in-between. Family, fun, desire, love and an appreciation for good music are largely what lines of the lyrics contain. The crowd join in the singing and it’s obvious they’re enjoying themselves as you can literally hear them sing their hearts out, shouting, “take me out to paradise city!” As the song is being brought to an end, the instrumentation comes to a crashing halt amidst more cheering and screaming, taking a bow when the ovation is high.

The producers on this super deluxe album has not been made available as of this writing.

Load more
Tags
Guns N' Roses
Ikedichim Chibundu Follow on Twitter November 14, 2022Last Updated: November 14, 2022
Load more
Back to top button
Close
We use cookies on our website to give you the most relevant experience by remembering your preferences and repeat visits. By clicking “Accept”, you consent to the use of ALL the cookies. In case of sale of your personal information, you may opt out by using the link .
Cookie settingsACCEPT
Manage consent