As a phrase, “Diary” brings a lot to mind. When “my” is included in the phrase, one gets a semblance of something deeply personal. On its own, “My Diary” is intriguing enough to get almost anyone to want to find out more.

It’s the same experience when you have “My Diary” as the title of an album from someone whose life is just as intriguing. There’s zero reason not to want to sate the maws of curiosity. You’re welcome to conclude then that Ghanaian singer Gyakie has got our attention with her latest body.

“My Diary” is a compilation at once personal and moving, potent to snap the attention of anyone even remotely close to the wavelength of the singer. So we invite you to join us as we take a walk into the afrobeat universe of her latest dump.

For the cover art of her latest project, Gyakie walked in orange – or a semblance of it. The tracklist was aligned to the right, while to the left was an image of the singer herself, head somewhat tilted and eyes looking straight ahead.

By her side was a flower of unknown species and just in front of her was a framed picture of what appears to be a younger self in on a beret: various angles, one person. The cover art doesn’t precisely give clues about what should pop in the tracklist.

Still, from the same, it is clear the songstress wanted to explore several aspects of life as we know it. Whether it’s her story or not, it’s not exactly critical here. 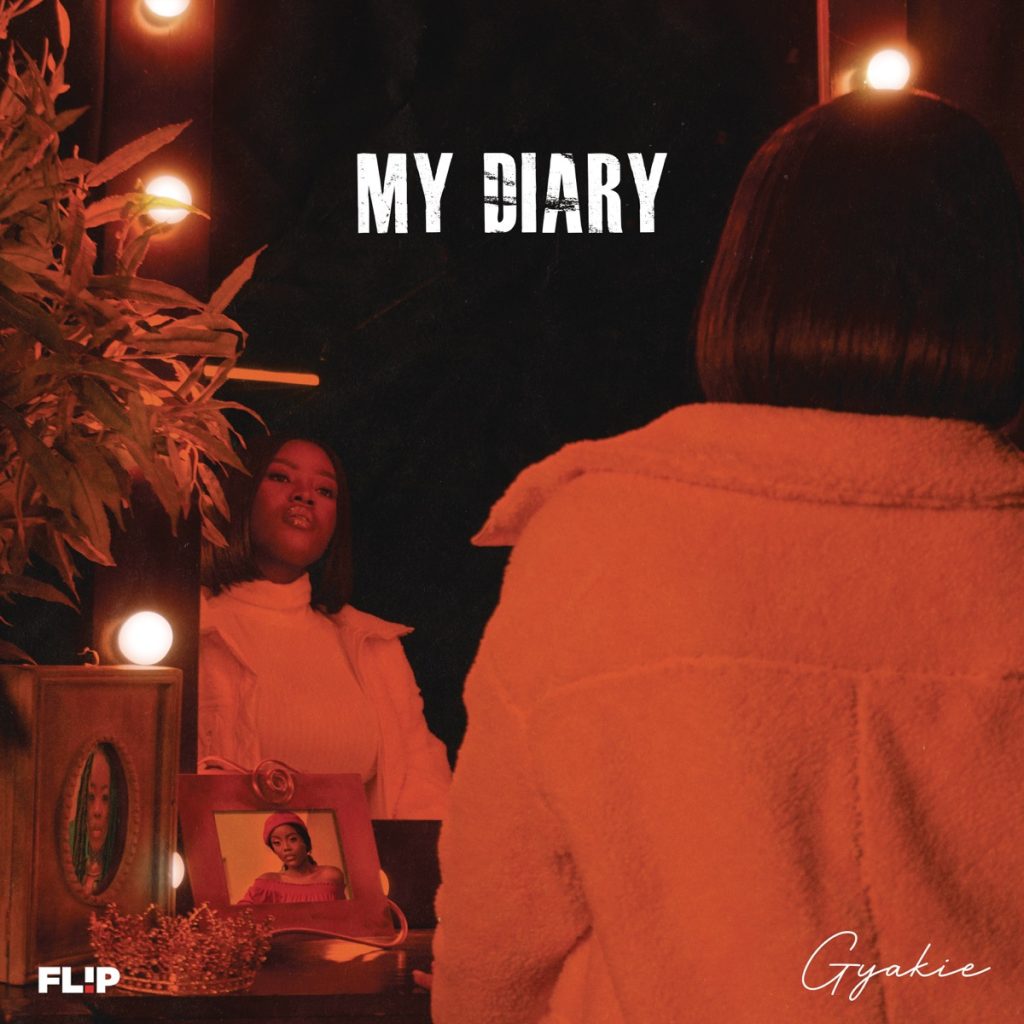 When it comes to tracklists, Gyakie is a know minimalist. She maintained the same minimalism in her “My Diary” album, pitching for just six tracks. The compilation begins with “Audience” and ends with “Waka Waka.” Between those are songs like “Far Away,” “For My Baby,” “Flames,” and “Something.”

“Compact” is the phrase for this release, and there isn’t much to quarrel with how the Ghanian singer elected to present the compilation. 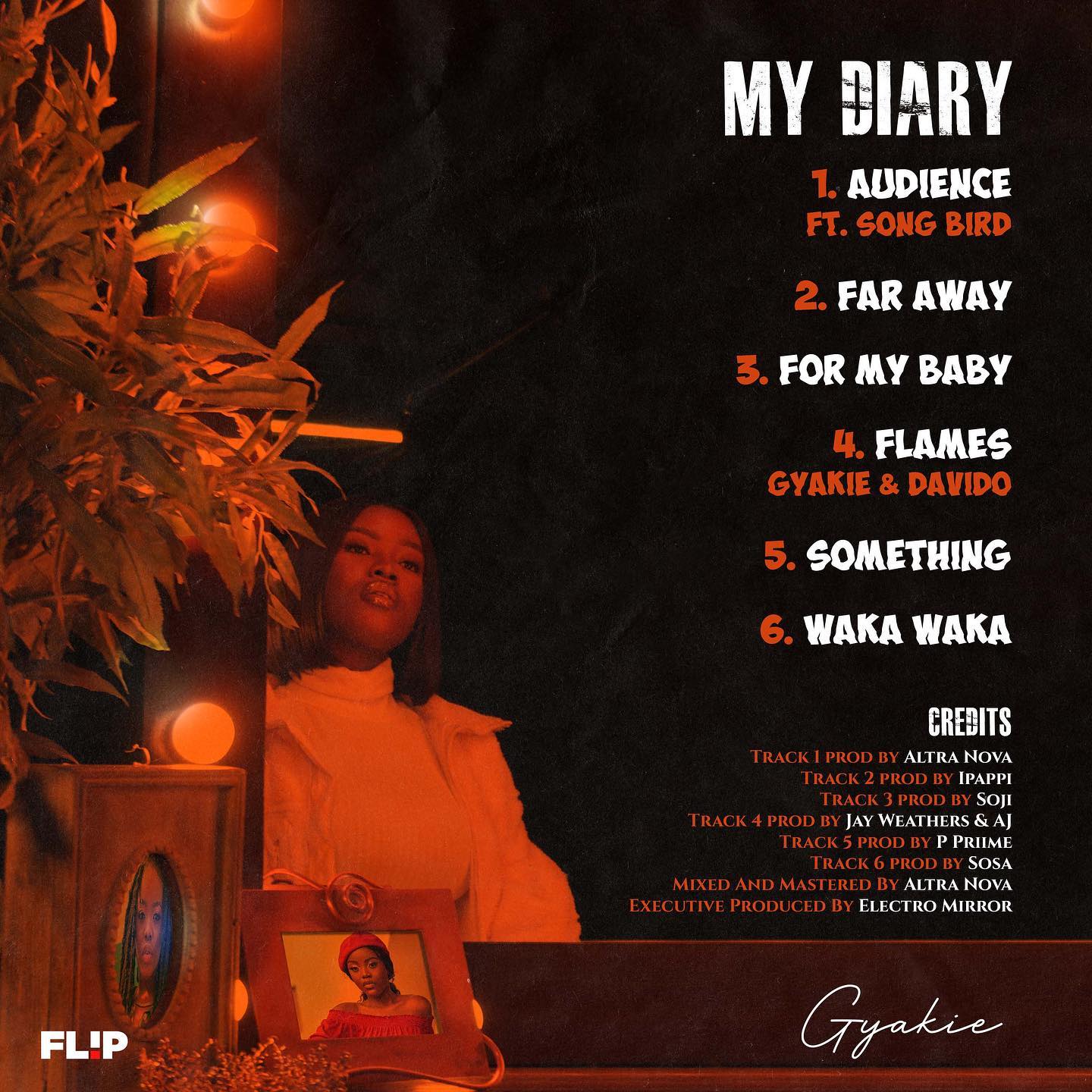 “Breezy” is how best to summarise the production of the album. Gyakie worked with different producers, but they managed to put together a harmonious whole that ignites the soul.

Guests or featured artists most times bring new life to a song. Some artists choose to go solo on a project, others elect to work with associates, and sometimes those whose work they admire. Gyakie has got a collaborative spirit.

For her album, she worked with just two guests. Song Bird popped on the first track of the compilation, “Audience,” and Nigeria’s pop ace Davido worked with Gyakie on “Flames.” Just two guests – and this we consider a win for a compilation of this length.

Six songs might be considered few by many. Still, at least one number will delight music lovers out there. Left to us, we would pick “For My Baby” and “Flames” among the songs that struck us something.

The one is something for lovers and believers in relationships and the letters of love. The latter is potent enough to keep music lovers warm.

These days, it’s almost impossible to find an album where an artist doesn’t dwell on love in some way. Gyakie followed that route but also delved into others, from followership to life generally. Relationships and friendships also had spots in the compilation.

Jackline Acheampong, who would rather be called Gyakie professionally, readily gave fans binoculars into her thoughts and what might pass for aspects of her life and vision via her latest project. Have a look!

Load more
Tags
Gyakie
John Anusie Follow on Twitter August 12, 2022Last Updated: August 12, 2022
Check Also
Close
Back to top button
Close
We use cookies on our website to give you the most relevant experience by remembering your preferences and repeat visits. By clicking “Accept”, you consent to the use of ALL the cookies. In case of sale of your personal information, you may opt out by using the link .
Cookie settingsACCEPT
Manage consent