Think about what a night at The Midnight Demon Club would be like. Wild, raucous, colorful, and a little disorganized? Exactly this is how the new album from Highly Suspect sounds. Additionally, the Massachusetts-based men who produced the album appear to have enjoyed themselves greatly that evening. They had so much fun recording the songs that they ended up with twelve of them, all of which were produced by Highly Suspect and WZRD BLD, a.k.a. Drew Fulk, who has collaborated with artists like Lil Wayne and Disturbed. 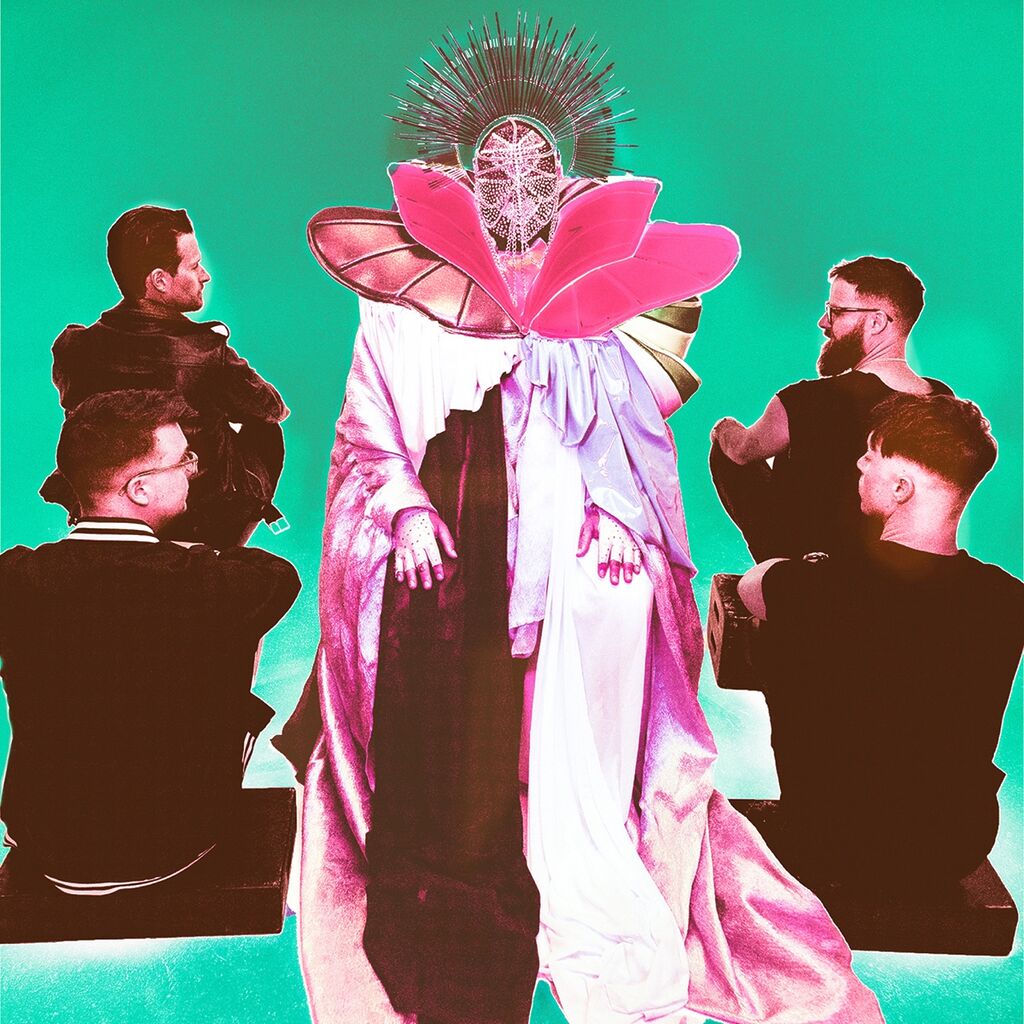 Set in a green background, Highly Suspect, all dressed in black outfits, sit side-to-side from each other on some black, square-like stuff that serves as a cushion from the uneasy feeling that comes with sitting on the bare floor for a prolonged period. Standing in-between them, though, is a faceless, eerie-loooking being in a flowing pink robe that is worn over a black outfit. Around its neck is the design of an open rose petal that spreads out to make the head more visible. The whole scenario paints a somewhat vivid picture of the album title which makes it kinda fitting?

The first track, “The Sound,” sets the tone for their fourth album with a hushed and enigmatic melody that gradually gives way to massive guitars and a group nod after roughly 25 seconds. This album opener is a typical Highly Suspect song that leaves you wanting more thanks to a large, nearly epic chorus and front-man and guitarist Johnny Stevens’ usual haunting vocals.

The next song, “Natural Born Killer,” features smooth piano keys and great drumming sequencing. The band’s lead vocalist does a beautiful job with his voice, belting out lyrics that hint on finding and feeling loved, but still admitting he’s a “natural born killer” regardless.

“Ice Cold” is a cool tempo Pop track and the band’s blending of great track composition and amazing lead vocals make it a beautiful listen. The heavy bass guitar strumming in the background can be distinctively heard which almost makes the track sound like something out of the Rock genre. The lyrics speak on “getting what you want” and being resilient irrespective. The lead vocal’s line of “I am ice-cold” can be heard ringing on a pitch.

The next album’s track, “Midnight Demon Club,” which is also the album’s title, has an amazing composition. An acoustic guitar can be heard strumming the track open, and just when listeners think they’ve heard it all, the song immediately switches gears with the lead singer spilling about his “demons coming out at night.” The song again switches toward its concluding part, and a hip-hop-type beat starts playing, gradually fading into the background without any vocals. A great listen for Highly Suspect fans.

“Evengeline,” the closing track of the 12-track album, starts out with a snippet of a dialogue of the lead vocalist singing while a lady laughs and blushes silly. It’s a cool love song as the lyrics suggest. The amazing guitar and piano riffs can be heard progressively in the background with the vocals smooth and sonorous. Indeed, Rock sounds so cool on this track but finally starts giving way to the sound of peaceful stirring waters in the concluding part of the track. A wonderful track to end such a well-produced album.

Making the best of a bad circumstance is the theme of “The Midnight Demon Club” since life is too short to spend it feeling down and unhappy. The idea is to enjoy yourself and keep going no matter what.

Load more
Tags
Highly Suspect
Ikedichim Chibundu Follow on Twitter September 10, 2022Last Updated: September 10, 2022
Back to top button
Close
We use cookies on our website to give you the most relevant experience by remembering your preferences and repeat visits. By clicking “Accept”, you consent to the use of ALL the cookies. In case of sale of your personal information, you may opt out by using the link .
Cookie settingsACCEPT
Manage consent