This is the 3rd full-length album from Atlanta emcee J.I.D. “The Forever Story” is his most intimate work to date. Rap icons Yasiin Bey, Lil Wayne, 21 Savage, as well as colleagues Lil Durk, EARTHGANG, Kenny Mason, Ari Lennox, and many more, appear as special guests on the album. Each song on the album serves as a chapter in J.I.D’s origin tale as a former collegiate football player turned rapper, serving as a precursor. 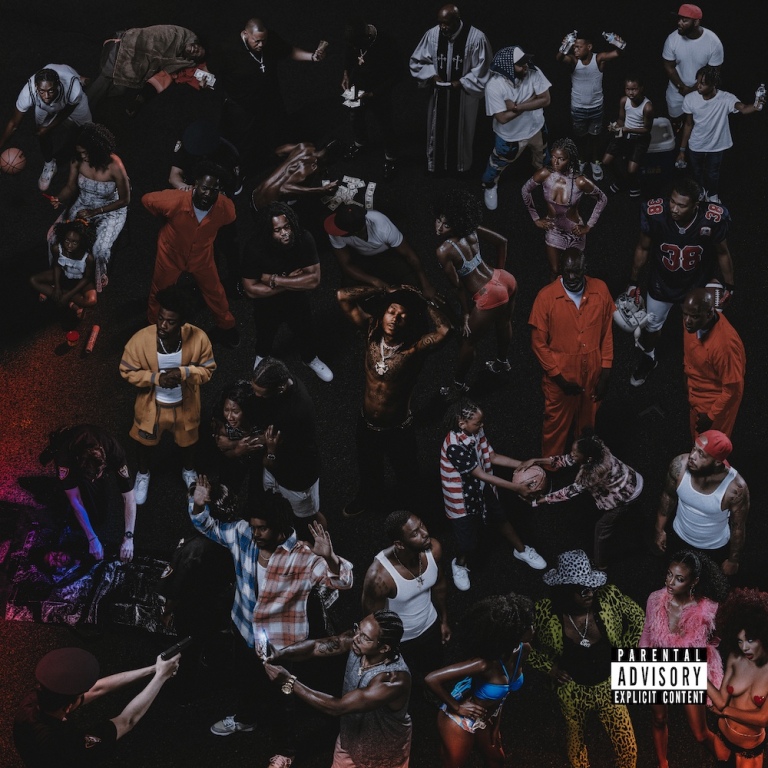 J.I.D is seen in relaxed in a meditative state of mind amidst of different black people, male and female, dressed differently and engaged in different activities as well. There’s a specific highlight on police brutality especially toward black people and the online awareness that now comes with it creatively showcased at the left, bottom corner of the photograph. And judging by the album title, the rapper not only tells his story on this project, but also touches on many topics in the society and how it affects his fellow black folks.

After the tuneful “Galaxy” intro, Nonstop da Hitman’s “Raydar,” the album’s first track, begins with a powerful bass line and some hi-hats and declares that “when it rains, it pours” before the beat changes to a more dramatic declaration that he will “take the cattle then burn the farm.” However, “Dance Now” samples Zusha’s “Yoel’s Niggun” and talks about making people dance with his 9, while “Crack Sandwich” takes a more challenging approach and admits that you can tell he never had shit.

The EARTHGANG tags along for the KAYTRANADA/JD Beck-laced “Can’t Punk Me” reminding everything that nothing will stop them leading into Baby Tate & 21 Savage coming into the picture for the chipmunk soul/trap banger “Surround Sound” produced by DJ Scheme talking about putting the rap game on their backs & snatching crowns. “Kody Blu 31” incorporates a crooning sample in the mix encouraging listeners to swang on, but then the Lil Durk-assisted “Bruddanem” shoots for a more mellow aesthetic thanks to DJ Khalil talking about loyalty.

The romance-focused “Can’t Make U Change” opens with a funky instrumental from Dreamville in-house producer Elite before switching into a melodic vocal loop. In the meantime, on “Sistanem,” J.I.D describes the life of a tour over some open boom bap production. “Stars” begins with a murky BADBADNOTGOOD beat and J.I.D talking about having his goals set, with E. Jones changing it up into boom-bap turf and a fantastic Yasiin Bey verse for the outro, while the Lil Wayne-assisted “Just in Time” takes a more symphonic approach while talking about having the time today.

While the song “Better Days” weaves some piano chords into the mix and talks about balancing the highs and lows, “Money” puts a guitar and some live drums provided by Khrysis into the mix and admits that’s all he truly needs. The album closes with “Lauder Too,” a futuristic follow-up to a highlight from The Never Story that was laced by James Blake and Thundercat. The bonus track “2007” is a 7 and a half minute epic that looks back on J.I.D’s life over the past 15 years; it’s a shame that the sample couldn’t get cleared because it’s a great choice for a closer.

An honest take on his personal journey as an artist and a black man and the state of things in the black community.

Load more
Tags
J.I.D
Ikedichim Chibundu Follow on Twitter August 26, 2022Last Updated: August 27, 2022
Check Also
Close
Load more
Back to top button
Close
We use cookies on our website to give you the most relevant experience by remembering your preferences and repeat visits. By clicking “Accept”, you consent to the use of ALL the cookies. In case of sale of your personal information, you may opt out by using the link .
Cookie settingsACCEPT
Manage consent