With the release of “Blood Harmony,” a salute to their Southern upbringing, Southern rock and roll, and minimalist blues, Grammy-nominated roots rock sister pair, Larkin Poe, build upon their previous two critically acclaimed albums, Venom & Faith and Self Made Man. Larkin Poe is recognized as a dominant presence in modern roots rock by “Blood Harmony.”

What is undoubtedly their strongest album to date is fueled by their fortitude as independent women and their prowess as vocalists, composers, and musicians. Megan Lovell plays lap steel, resonator guitar, harmony vocals, and other instruments, and Rebecca Lovell plays vocals, guitar, and keys. Both Megan and Rebecca Lovell are multi-instrumentalists. 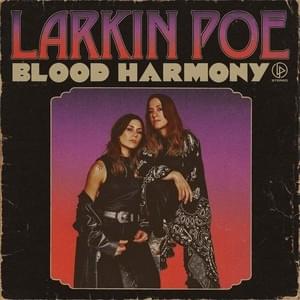 The two female artists in two different black outfits pose for the cam on a blue and orange background. The cropped photograph was framed and made to exist on a dark background along with the album title, artist name and their logo. Quite the simple cover.

“Deep Stays Down,” the eerie blues stomp that serves as the album’s intro, is a masterclass in using simplicity to evoke emotion. The song travels through the South’s roots and swampy rhythms, where secrets are buried deep. Lyrics that are poetic bring up pictures of cicadas buzzing in a humid night where something is going on beneath the glitter of a marsh lit by the moon.

Larkin Poe launches into “Bad Spell,” a blazing number solidly rooted in blues-rock, as a response to Screamin Jay Hawkins’ song “I Put A Spell On You.” This hard rocker, which is fierce and fantastic, is skimmed by fuzzed-up guitar. Snatching the gloom of Hawkins’ song, they responded with sneering barbs and their badass personalities. This song is a throwback to the early shock rock pioneer; it is dark, aggressive, and dripping with feminine strength.

As the album transitions from its gothic opening, “Georgia Off My Mind” enters with a radio-friendly southern rock lament about achieving one’s aspirations and leaving behind what’s left in the rearview mirror. With slide guitar weaving over soaring vocals and harmonies, it is a sincere love letter to Georgia while traveling to Nashville.

A homage to independence and forging one’s own way, “Strike Gold” is filled with stomping beats. It’s a great piece that embodies Larkin Poe’s individuality and is a monument to female power and trusting one’s instincts; it features stinging lap steel, lots of groove, vocal phrasing that captures the rhythm, and a tight rhythm section. But what elevates them to greatness is their music, which features their singing and musicianship.

Rebecca’s soulful vocals are showcased on the album’s title track, “Blood Harmony.” a song that explores the strong bonds forged through family history. A roots-rocking winner is used to illustrate the importance of the family tree. Don’t miss the Southern rocker “Summertime Sunset,” which features jangly guitars, pedal steel, and vocals that soar to amazing vocal range.

With a sparse, eerie blues track, acoustic guitars, and a gothic mood, Blood Harmony concludes in the same way it began. As somber vocals tell the tale, pedal steel permeates the richness and the spooky atmosphere. The lyrics, which make references to dying and seeing one’s maker, happen to be the main focus, bringing the album to a rather calm and introspective end.

With “Blood Harmony,” they reflect on and tell tales about the South, kinship, and familial ties. All tracks present on the album have a Southern rootsy, incredibly soulful vibe that occasionally hints at something sinister.

Load more
Tags
Larkin Poe
Ikedichim Chibundu Follow on Twitter November 12, 2022Last Updated: November 12, 2022
Check Also
Close
Load more
Back to top button
Close
We use cookies on our website to give you the most relevant experience by remembering your preferences and repeat visits. By clicking “Accept”, you consent to the use of ALL the cookies. In case of sale of your personal information, you may opt out by using the link .
Cookie settingsACCEPT
Manage consent