“ØF KINGDØM AND CRØWN” is easily the best thing that MACHINE HEAD have produced in over ten years. The line-up might be almost unrecognisable from their previous incarnation, but this is a triumphant return to form for one of metal’s most beloved but inconsistent acts. Paint yourself the picture of a futuristic wasteland with an omnipresent red sky and you have the ingredients to really immerse yourself in “ØF KINGDØM AND CRØWN.” 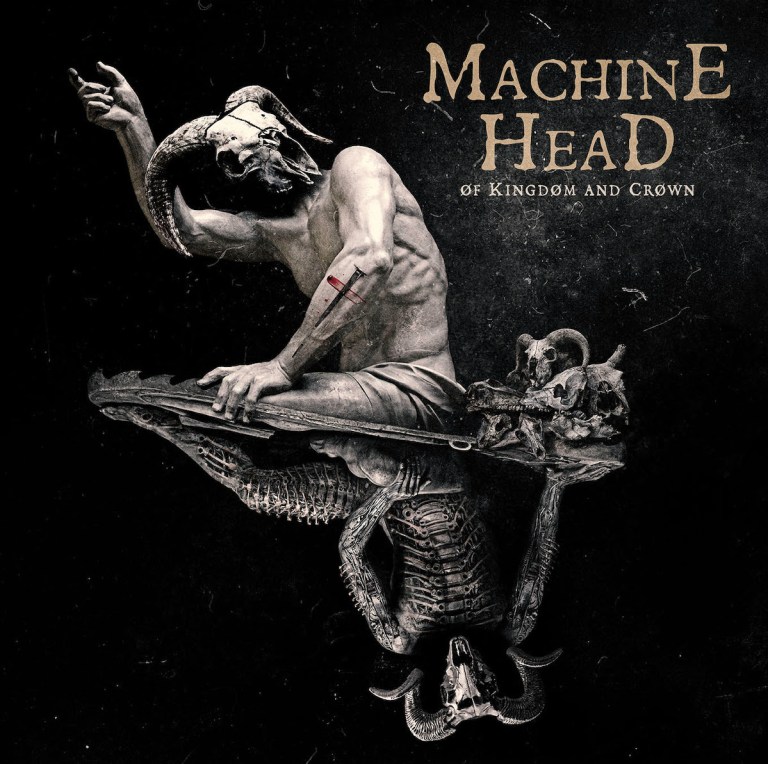 A topless, ripped-out young man wearing a mask with long, bent husks, turns his head and lifts a waving hand, while striking a pose for the cam. But underneath this image lies another version of him lurking in his reflection. And the man in mirror looks like the result of piecing together various pieces and sheets of metal, only fashioned after the version in the meat suit.

The album’s big opening track, SLAUGHTER THE MARTYR, sets the tone. The dreamy start, which clocks in at double digits, intensifies behind Flynn’s passionate vocals. The song enters its second section with a pounding bass drum beat and pulsing guitars. Machine Head are excellent at creating epic. Here, they demonstrate their talent by creating an incredibly exciting and grandiose introduction. You find yourself wanting to raise your fist as soon as Robb Flynn enters the scene with his particular vocal style.

How do you follow up on a lengthy and detailed introduction? Strive to thrash the jugular. “CHØKE ØN THE ASHES ØF YØUR HATE” stings deeply. Without a doubt, the Bay Area thrash DNA is present. Both the vocal delivery and the guitar playing, as well as the dissonance of the Kietyka fretboard, have a noticeable Mustaine influence. Thus far, so relentless. “BECØME THE FIRESTØRM” features some excellent twin guitar work that makes the song a little lighter and melodious, but it’s still a vicious bastard of a tune. When MacEachern’s bass turns, the soloing returns to the Bay.

“ØVERDØSE” follows and sets up another set of songs that tell the story of another character. The interlude precedes “MY HANDS ARE EMPTY” which sets off in mournful fashion. Foreboding dark effects and a vocal refrain of melancholy build into a halo of swirling guitars before an explosion of grief in music. Shifts back and forth between the opening style and the crushing explosion make for a thrilling ride. Lyrically, there is a little dash of Slipknot in the nihilistic feel of the song.

“UNHALLØWED” is the song that comes after “MY HANDS ARE EMPTY.” With more sung vocals and the destructive groove for which Machine Head are renowned, the mood completely changes. The song is dripping with emotion, and Alston’s drumming shines in its frenetic tempo. There is a flurry of fiery guitar solos over the percussion.

The tale is punctuated once more with “ASSIMILATE” when it introduces “KILL THY ENEMIES.” It becomes more chaotic and claustrophobic as the guitars become more dense. The assault continues with “NØ GØDS, NØ MASTERS,” a song with a tremendously memorable vocal take on the track title that will be a lock for live shows in the future. Once more, Kietyka and Flynn’s guitar playing shines with pounding riffs and shrill guitar licks that leave their mark.

“BLØØDSHØT” swirls like an air raid siren of anger before giving way to a another glorious slice of thrash metal. One of the great things about Machine Head is that they pay their dues to their roots and the underground but put their distinctive stamp on anything. “TERMINUS” again punctuates the maelstrom before the album closes with the humongous “ARRØWS IN WØRDS FRØM THE SKY.” Like the album opener, the sing is grandiose and goes through the whole scope of emotions.

There is a real sense of progression as the album unfolds, the whole thing held together by a grandiose sci-fi concept, which is also something new for the band.

Load more
Tags
Machine Head
Ikedichim Chibundu Follow on Twitter August 30, 2022Last Updated: August 30, 2022
Check Also
Close
Load more
Back to top button
Close
We use cookies on our website to give you the most relevant experience by remembering your preferences and repeat visits. By clicking “Accept”, you consent to the use of ALL the cookies. In case of sale of your personal information, you may opt out by using the link .
Cookie settingsACCEPT
Manage consent