Madonna’s brand new release, celebrating four decades of her club hits finally arrived. The collections, curated by the reigning Queen of Pop herself – are a homage to her unmatched chart success, marking the historical moment she topped the Dance Club chart for the 50th time, – making her the first and only recording artist to have 50 number one hits on any single Billboard chart.

Boasting more than 220 minutes of remixes, Finally Enough Love: 50 Number Ones covers decades of dance club chart domination. The album is arranged mostly in chronological order, showcasing the countless re-inventions that have made Madonna an international icon of both music and style. Sadly, the compilation’s selling point also turns out to be its Achilles’ heel, with Madonna making what can only be seen as some pretty weird selections from her remix archive. 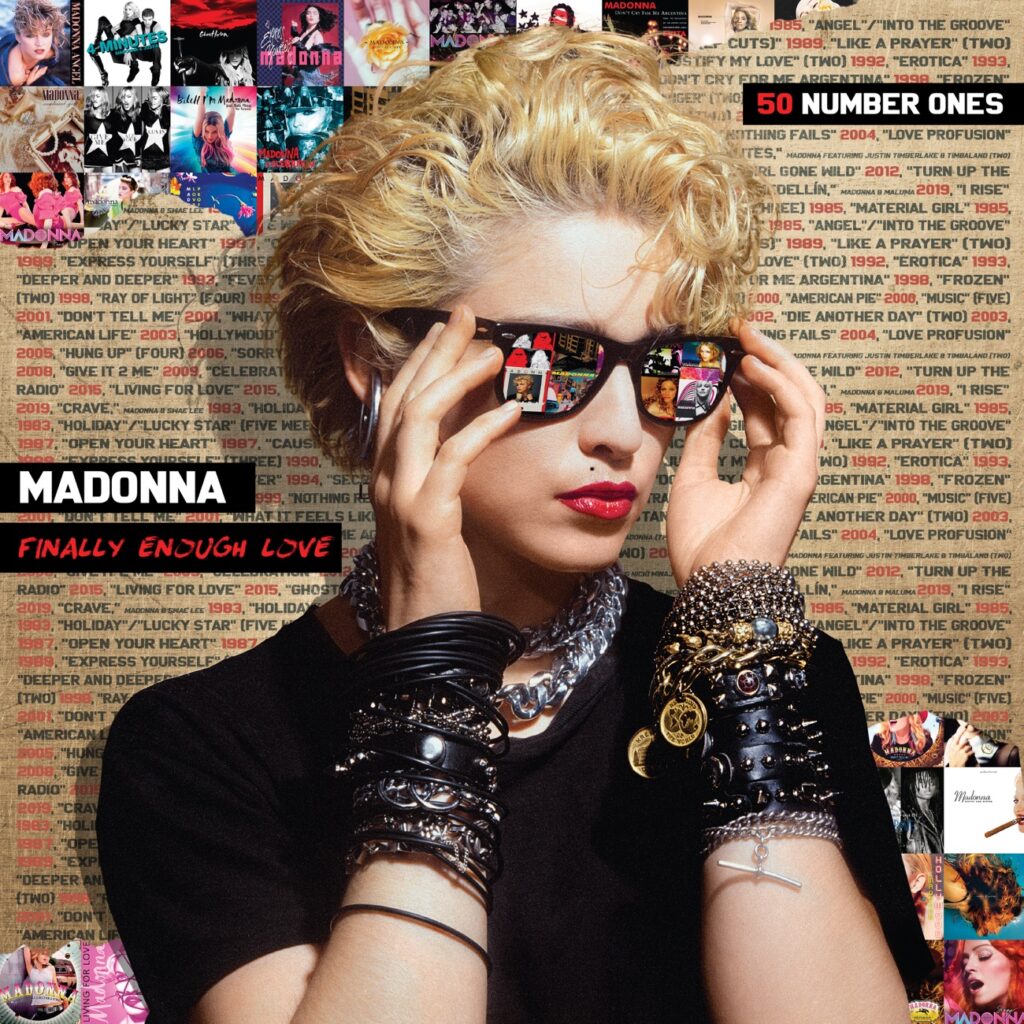 A younger version of Madonna is seen donning a all-black outfit with both wrists embellished with fancy ornaments and jewelry, as she strikes a pose for the cam that captures all her in all her glory with a long list of her hits scattered on the brown background behind her.

Opener, “Into the Groove” (You Can Dance Remix Edit) is irresistible and influential. “Into the Groove” is arguably the template for the club-pop hybrids that started in the ‘80s and continue to be released to this very day. With instrumental effects, stammering vocals, and sporadic rhythmic flourishes, the “You Can Dance Remix Edit” of “Into the Groove,” which this compilation makes digitally available for the first time, is glorious even in its truncation. It gives one of Madonna’s most famous songs a sparkling alternative flavor. However, it invites unfavorable comparisons to Madonna’s earlier work.

“Vogue” (Single Version) is simply a perfect pop song that hasn’t sounded out of place on any dance floor at any time in the last 30 or so years. “Keep It Together” (Alternate Single Remix), the fifth and final single from 1990’s “Like a Prayer” stands toe-to-toe with the title track and “Express Yourself” as the album’s premiere floor-filler.

“Girl Gone Wild” (Avicii’s UMF Mix) which happens to be the best song on 2012’s “MDNA” got a blistering overhaul for the Ultra Music Festival by the late, great Avicii. This has a drop for the ages. “Frozen” (Extended Club Mix Edit), is the best of the “Ray of Light”-era remixes contained on “Finally Enough Love.” Swap it out with Madonna’s recent Sickick collaboration if you’re looking for something a little more contemporary.

Closing the compilation with “Erotica” (Underground Club Mix), the slinky, disco-tinged overhaul that Madonna gave “Erotica” on the “Confessions” tour is a triumph.

“Finally Enough Love” is supposed to represent the singer’s own favorites from her extensive remix catalog. It’s an intriguing premise, promising a candid look at what this musical magpie makes of her excursions into club culture. But equally, “Finally Enough Love” is about reconnecting with the dance music giants of yesteryears.

Load more
Tags
Madonna
Ikedichim Chibundu Follow on Twitter August 25, 2022Last Updated: August 25, 2022
Check Also
Close
Load more
Back to top button
Close
We use cookies on our website to give you the most relevant experience by remembering your preferences and repeat visits. By clicking “Accept”, you consent to the use of ALL the cookies. In case of sale of your personal information, you may opt out by using the link .
Cookie settingsACCEPT
Manage consent