“Get Rollin'” is a carefree party album that doesn’t take itself too seriously but still retains the anthems that have been carefully built. The heavier tracks have a danceable swagger because to Kroeger’s discovery of a lyrical cadence. Vocalist Chad Kroeger and guitarist Ryan Peake produced and engineered the group’s self-made album. The album is consistent with what you would anticipate from Nickelback on the one hand, but the band also allows for certain left turns. Now that Nickelback finally manages itself, it has the freedom to choose its own pace. 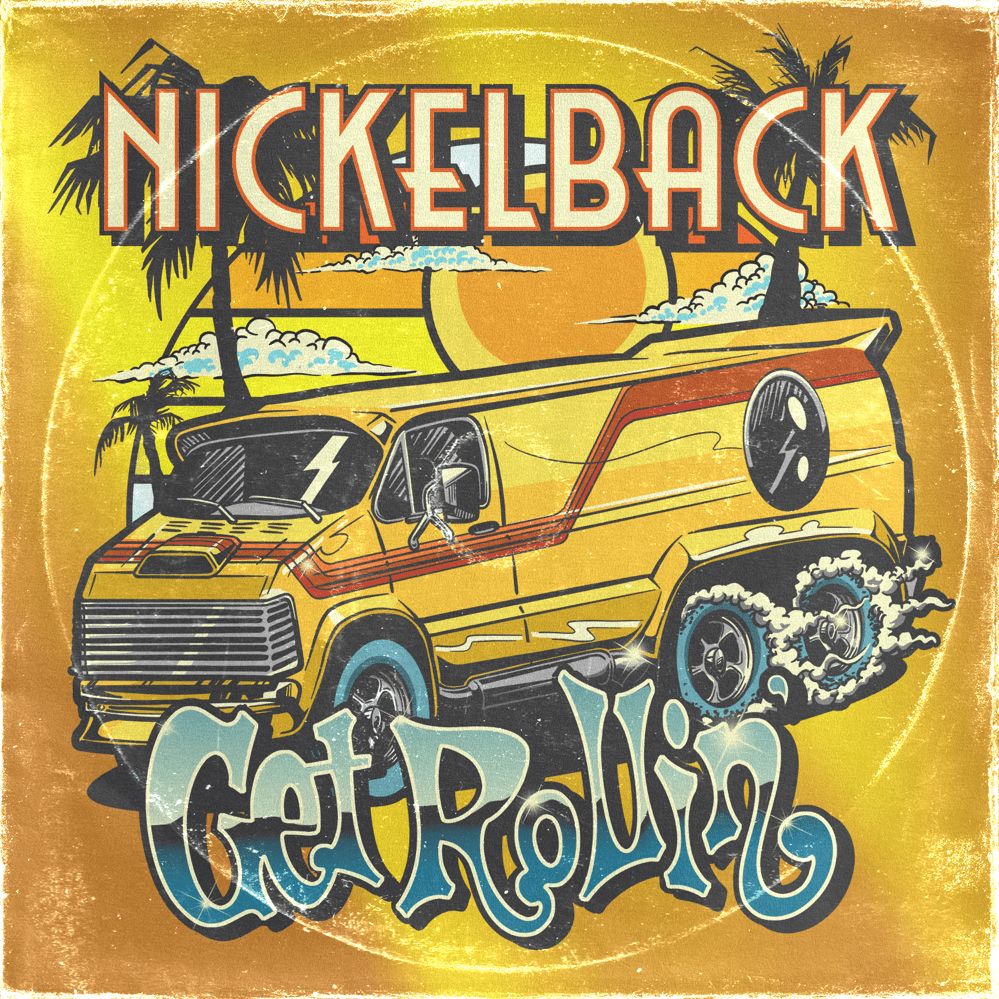 Giving beach vibes, the album cover features palm trees, ocean waves and an animated yellow bus on the move as illustrated by the beach sand and gust of wind flirting with the back tyres.

The album’s opening track, “San Quentin,” was influenced by a conversation Kroeger had with one of the prison’s wardens at a Guy Fieri birthday party. It is the band’s most precise hard-rocker in a long time. The riffs are epic, the harmonies are tight, and it’s fun. On Get Rollin’, there aren’t many guitar solos, but when there are, Kroeger’s fretboard technique is remarkable. Daniel Adair on drums and Mike Kroeger on bass form a tight rhythm section.

On the Nickelback hard-rock spectrum, the down-tuned rocker “Skinny Little Missy” sits midway between Feed the Machine and No Fixed Address. The song succeeds for many of the same reasons as “San Quentin” did. The scorching guitars, pounding drums, and Kroger’s solemn delivery are all pushed up to the maximum, leaving no space for nuance. The tone shifts for the wistful acoustic song “Those Days,” which is related to the band’s other radio-friendly hits like “Photograph” and “Someday.” Despite the common features, Kroeger has the skill to differentiate it enough.

“High Time,” a southern rock tune, is unique in the group’s discography. Although the group has experimented with Country music in the past, this is the deepest South the group has ever visited; think of a mix of Willie Nelson, Lynyrd Skynyrd, and Nickelback. As Kroeger sings about jumping into a van and lighting up for a weed-infused road trip, his country drawl takes some getting used to. It’s entertaining, never gets old, and could be a good musical direction for the group to pursue in the future.

“Vegas Bomb,” a required drinking song, is exactly what you might imagine it to be: rock & roll, sex, and drugs through the lens of a crazy night in Sin City. It borrows elements from 1980s rock songs, from the gang vocals to the quick fret work. The light and lyrical song “Tidal Wave” uses the metaphor of ocean surfing to describe a love story. Peake plays the guitar with a lot of room, while Kroeger adds beautiful, full harmonies. In every way, “Does Heaven Even Know” is a lighters-up power ballad. Although the songwriting is more genuine, it shares some of the Country aesthetics of “High Time.”

With its acoustic-meets-distortion sound and Kroeger’s layered vocals, “Steel Still Rusts”‘s bluesy stomp reminds one of Alice In Chains. The mid-tempo rocker “Horizon,” which has the most contagious lyrics on the record, finds the vocalist returning to the sea. The song “Standing In The Dark” resumes the action. It is cheerful yet not based on heavy riffs or music, but rather on energy and singing.

The appropriately-named “Just One More,” a smooth, gloomy rocker with Kroeger’s echoing vocals, serves as the band’s coda to Get Rollin’. The album’s finale most closely resembles Nickelback’s early tracks while incorporating beautiful, contemporary production.

Realness in its raw form was expressed throughout the album as well as tackling societal issues.

Load more
Tags
Nickelback
Ikedichim Chibundu Follow on Twitter November 18, 2022Last Updated: November 18, 2022
Check Also
Close
Back to top button
Close
We use cookies on our website to give you the most relevant experience by remembering your preferences and repeat visits. By clicking “Accept”, you consent to the use of ALL the cookies. In case of sale of your personal information, you may opt out by using the link .
Cookie settingsACCEPT
Manage consent