Bouncing onto the scene back, ‘Unwanted’ marks the third album from Pale Waves preceded by ‘Who Am I?’ in 2021 and ‘My Mind Makes Noises’ in 2018. With the ever-distinctive Heather vocals, strong hooks and anthemic melodies, ‘Unwanted’ captures the pop-punk 90s and early 00s sounds.

As a follow up to the ‘Who Am I?’ album, for some it may feel a little too similar and somewhat playing it safe but if you can harness that sound which Pale Waves clearly have. Unwanted offers a more commercial alternative rock sound with a pop punk edge whilst retaining the angsty emo driven lyricism that Pale Waves are recognized for. 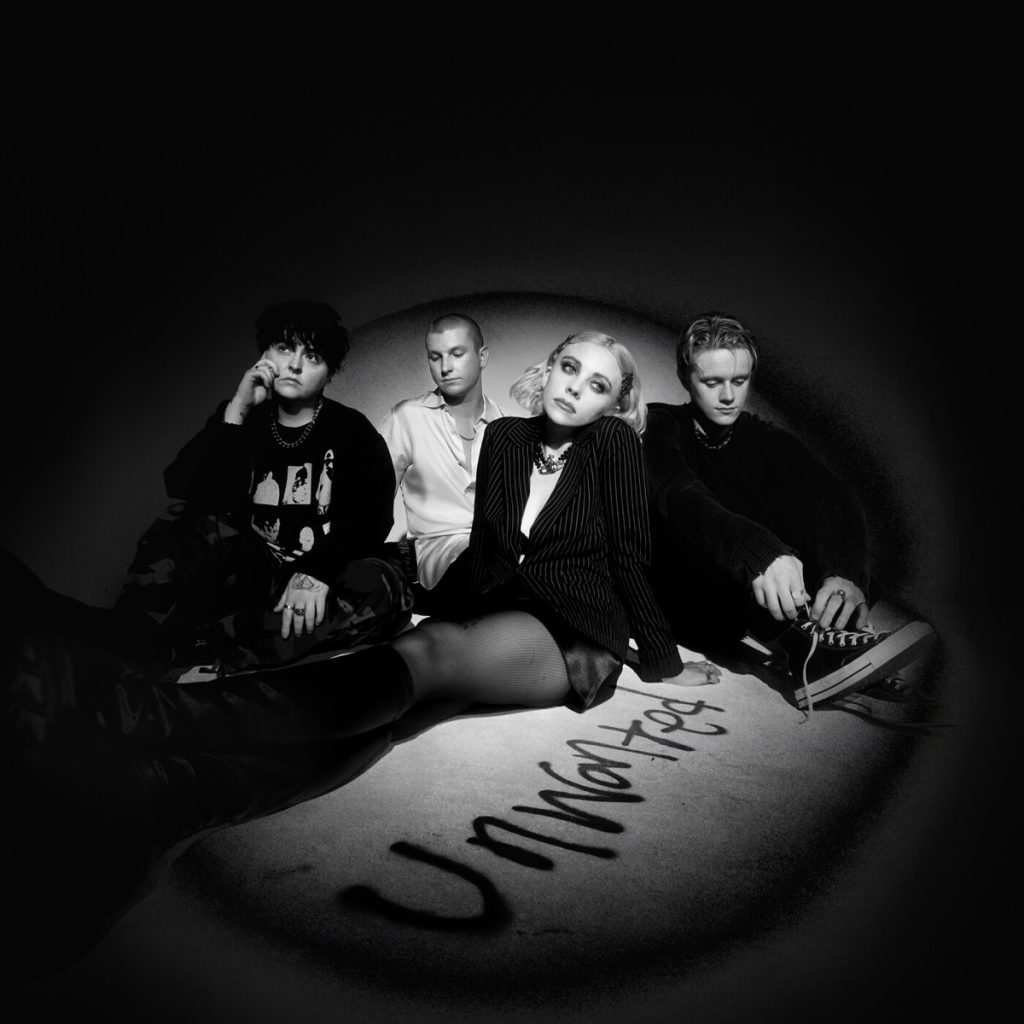 Pale Waves, the four-piece band consisting of Heather Baron-Gracie (lead vocals/guitar), Ciara Doran (drums), Hugo Silvani (lead guitar) and Charlie Wood (bass), are seen photographed in black and white, seated dejectedly on the floor with the title of their album scribbled on the floor in black paint. It kinda seems as though they were bundled up together, cast into a dark hole, abandoned there, and surprisingly discovered, as the limelight throws its rays on them. “Unwanted” never had a more befitting art.

“Lies” throws open the doors to the remainder of the album with its power chords, angst-filled lyrics, and powerful drumming. The song is so entertaining that it should be played loudly when you scream at someone who has harmed you. It keeps you interested in learning more, as any excellent opening should, but the effect is short-lived.

“Alone” is all about regret and about wanting to turn back the clock to change one pinnacle moment for the better. “You’re So Vain” is a diss track about the most self-centred person in life put together with a bouncy pop-rock-turned-punk accompaniment that all ages can love and rock out to.

Unwanted has genuine highlights even if it grows boring and repetitive as an album. Calm and bittersweet, “The Hard Way” might be one of the best songs in the band’s catalogue, a gentle reminder to protect the vulnerable. The energetic “Jealousy” will make for a fantastic sing-along at live shows. Besides, Pale Waves stand proudly with the community of misfits and LGBT fans, so Unwanted’s message will resonate with many of us who have also felt that way.

Title track “Unwanted” brings a pop-rock feel reminiscent of Avril from the 2000s with “Only Problem” leaning more into that rock vibe. Slower tracks “Numb,” and “Without You” are more sentimental, reflective tracks that mix up the pace of the album offering some light and shade before launching into “Act My Age” that bookmarks a refined and self-assured version of the band.

The album ends with ‘So Sick (Of Missing You)’, a melancholic conclusion which is laced with tragedy and frustration alongside the full album’s theme of angst and fury. It’s targeted at the narrator and the former love interest, as the lyrics take turn in pointing the blame on the former flame’s flaws and on the narrator themselves for still thinking about them and missing them despite their toxic traits. It’s a tale all too real in this day and age, and a story that many around the world can relate to.

The record isn’t just an exercise in teenage nostalgia: it’s also rippling with very current concerns. With a thematic grounding in the personal issues affecting their fervent fan community – and the LGBTQ+ landscape in particular – this collection finds Pale Waves unabashedly planting their flag in long-abandoned spaces in a way that seems anything but cynical.

Load more
Tags
Pale Waves
Ikedichim Chibundu Follow on Twitter August 12, 2022Last Updated: August 12, 2022
Back to top button
Close
We use cookies on our website to give you the most relevant experience by remembering your preferences and repeat visits. By clicking “Accept”, you consent to the use of ALL the cookies. In case of sale of your personal information, you may opt out by using the link .
Cookie settingsACCEPT
Manage consent